State of the Blog Address for 2017

It's that time of the (new) year so I'll recap the past year's progress on the blog moreso for myself but hopefully might be useful entertaining or informative for any readers as well.  Looking over the past year, it was more productive than 2016 largely due to digital hobby work as opposed to physical models painted.

I caught the Star Trek bug again back in 2016 and started doing a few FASA style sheets for some of my favorite fanships.  I continued that in 2017 with many more ships as well as some house rules and even counters to use them on the tabletop.  This culminated with my publication of a fan ship pdf collection under my SHIELDS UP! label.  While I definitely needlessly reinvented the wheel by using MSPaint for interior and cover art and Open Office for publishing, I was quite happy with the end result linked below.  I can't thank enough the various artists who let me use their fan created ship art on my sheets as without them I'd have some pretty bland stat lines and nothing else! 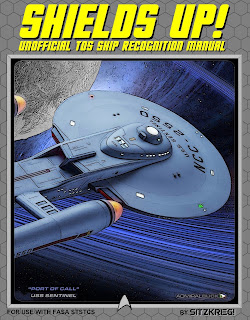 After putting out the above supplement for a long dead game from the 1980's, I decided to focus on the exact opposite and publish a few ship stat sheets for the then upcoming Star Trek Adventures RPG from Modiphius games.  Just like with the above FASA sheets, the company and fan artists were kind enough to use their art yet again.  I eventually decided on releasing two four packs of ships that likely would never otherwise see themselves officially written up for the RPG, one set of fan ships and the other of FASA classics. 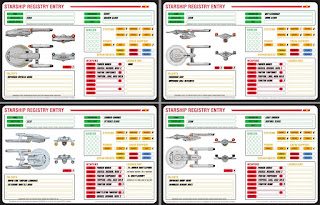 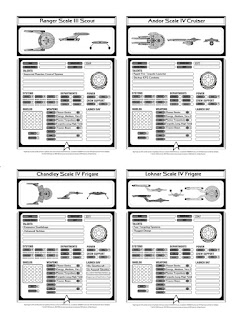 With the release of Warhammer 40,000 8th Edition this past summer along with the Primaris marine models, a tiny bit of my 40k interest resurfaced.  Largely due to the horribly unbalanced army construction rules of the previous 6th/7th editions, my interest in the property (models, novels, game rules, etc) dropped down to almost zero during those years.  While I don't have any definitive opinions on the new edition, my first impression is that, while they did address my biggest complaint in returning some semblance of sanity/balance to the construction rules, they also made the game more bland with bucket'o'dice mechanics at the expense of some common sense and variety in the ruleset.  Similarly mixed is my reception to the new Primaris style marines.  Whereas I really like the actual basic intercessor models themselves, I wasn't a fan of their introduction into the backstory of 40k and the likely replacement of "normal" marines both figuratively and literally (in terms of models) down the line.  I'd have strongly preferred introducing them just like every other model kit and fluff development for the past 30 years but there was no doubt that I preferred the more truescaled proportions and poses.  I picked up a few models here and there on ebay and decided to finally start my long awaited Winged Hussar chapter of Space Marines.  With some trial and error, I decided on the paint and modelling scheme on the left below. 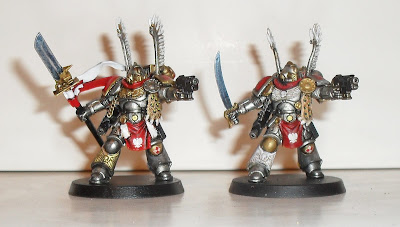 Yup... my entire 2017 completed physical hobby effort amounted to the two models above along with a third prototype marine.  I do hope to continue to paint a few more with the same scheme (including a larger 54mm Inquisitor scale variant) but it was always meant to be a small project of a few models largely for potential future wargaming or RPG characters rather than a full army.

Additionally, I posted a few other one off updates about topics such as finishing my Heavy Gear Rafm scale force with some head swaps thanks to Ashley from Paint it Pink, tweaking some images to make a bucket filling version of the Primaris Coloring Book from GW, and commenting at length about the closure of several gaming companies (most notably Spartan Games whose line of Halo Fleet Battles miniatures I covered here extensively).

Looking forward to what I hope to accomplish in 2018, I hope that I'll strike a more even balance between virtual hobby work (like house rules) and phsyical ones (painted models).  While I've got several other house rule ideas at various stages (like advanced rules for Star Trek Attack Wing, rules lite intro Shadowrun, and mass battle LRB HG Blitz modifications), I don't have any concrete plans to publish them at this time.  With my slow return to physical painting, I'd like to instead finish a few more models from previous years such as my last remaining Tau Broadside battlesuit, the Logan Grimnar conversion from the Primarch Horus model, as well as a single Deathwatch model which happens to be my first hobby purchase of the new year.  There are some more substantial hobby projects dancing around my head as well (like a small force of Adeptus Custodes for 40k or finishing up my Rafm scale Heavy Gear force) but, in the interest of keeping myself honest, I won't be counting those chickens before they hatch and instead keep my sights a bit lower/more realistic.

Thanks again to my readers for sticking with me for another year and I hope to post some interesting things in the 12 months to come!
Posted by SITZKRIEG! at 9:56 PM