When I posted my first FASA stat sheet, I was asked on another site whether or not there would be a refit variant.  At the time, my answer was no since the designer, Bill Krause, didn't make one up.  Over time, the idea grew on me and I decided to ask him if I could tweak his images to include a refit version of the Sentinel class with a bit more TMP design aesthetics.  He graciously allowed me to do so and even gave me a few pointers when working on the design.  I'm not an artist so this is mainly just a tweak of his existing design mixed with bits from his Shangri-la class.  In any case, here is the modified (yet again!) Sentinel Class cruiser for the FASA Star Trek Starship Combat game updated in the original post.

For anyone wondering just how big this fast attack/light cruiser is compared with the much more familiar U.S.S. Enterprise variants of the same era, here is a size comparison using the original FASA art that I'm trying to emulate.

Posted by SITZKRIEG! at 8:06 PM No comments:

BLOGGER'S NOTE:  I've since revised the Hood FASA stat sheet and posted a new blog article linked below in honor of the launch of Bill's model.  I've decided to keep this entry up just for historical reference.


Well, much to my surprise I'm still on a Star Trek kick at the moment and still working on some FASA Star Trek combat ship stats.  Once I've done a few more, I'll probably add a tab to the right to better organize the articles like I did for my Robotech and Heavy Gear houserules.  This Hood battlecruiser ship design is once again thanks to the talented Bill Krause who came with the Sentinel that hooked me months ago forcing me to make FASA stat sheets for the first time in 20 years.

This one is a warship unlike the previous light cruiser and meant to kick Klingon and Romulan butts while taking their names.  My goal was to make something based on yet significantly more powerful than the TOS era queen of battle, the Constitution Mk IV, while still markedly inferior to the more modern upcoming Enterprise class... a "missing link" between the two in terms of power as well as components.  Additionally, I wanted to incorporate features of the newer frigates like a troop contingent to better reflect its unique status as a "battlecruiser" in Starfleet predating the troop carrying frigates like the Chandley.  To get the full sized picture suitable for printing, right click and open the image in a new window. 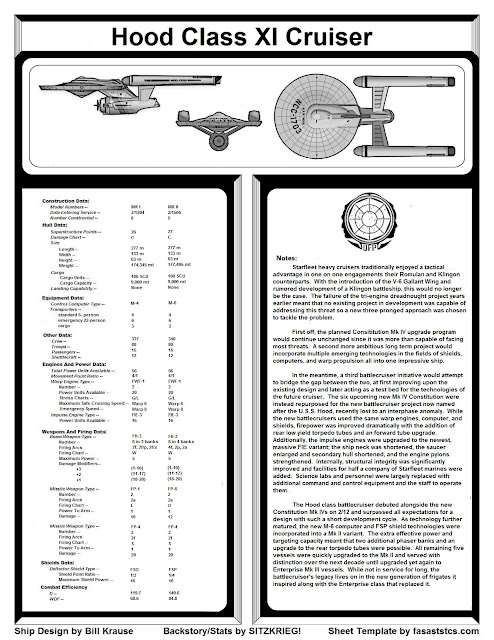 Note:  Please note that I've cleaned up the format and minimally tweaked for balance the above sheet since its initial publication.  Furthermore, Bill is now working on the physical U.S.S. Hood model and making design changes from the initial concept that the stats are based off of; as such, it may undergo additional design changes to follow suit.

Posted by SITZKRIEG! at 4:50 PM No comments: