For a change of pace, I figured I'd post something that I came up with earlier this year while rewatching several of the Star Trek series on Netflix, most notably Enterprise.  First off, thanks to the talented Doug Drexler for designing both the original NX class ships for the TV show as well as the image of the NX refit that I used as the basis for my own conversion. 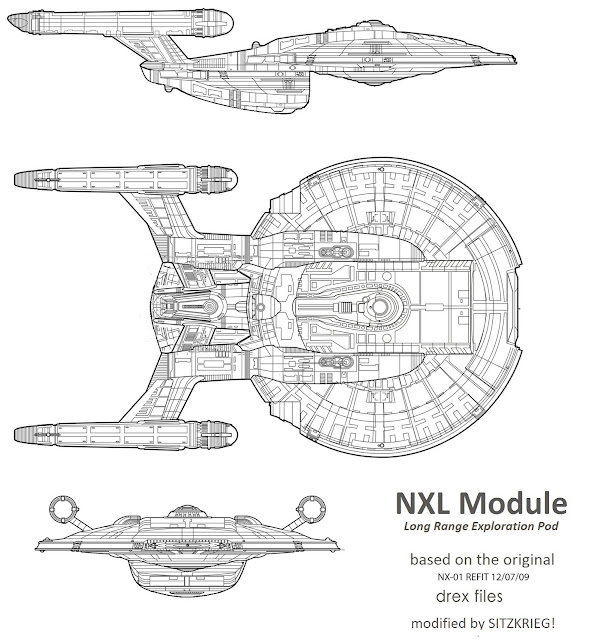 As the creator of the ship design, Doug Drexler, said in an episode of the Trekyards show, the prototype NX warp 5 ship had numerous variants and upgrades in development before launch.  During the first years after the initial launch of the NX-01 Enterprise, the galactic neighborhood proved to be far more dangerous than Earth ever thought and the various tactical and defensive upgrades were prioritized over more exploratory and scientific ones.  After the looming threat of the Xindi weapon was over, the focus shifted back to a more even handed approach regarding future upgrades.

One of the first primarily non-tactical upgrades deployed was the NXL long range exploration module.  While the later refit of the NX design was more promising, it was also fraught with delays and developmental hurdles as is common with more innovative designs.  The NXL module, combined with the earlier fast tracked tactical upgrades like photonic torpedoes and phase cannons, extended the capabilities significantly across all mission types over what was possible with the original design despite being a purposeful stop gap measure.

Unlike the refit, the NXL module did not replace the main engineering components.  Instead, it was primarily geared towards extending the mission duration between resupplies as well as acting as an emergency life boat for the crew.  Storage capacity was tripled along with the addition of larger, more spacious shuttle bays at the front of the pod.  The original now blocked shuttle bays were partly converted to saucer storage (although they could still serve their original purpose in case of a separation).  Other ventral inaccessible systems like grapplers and weapons had equivalents installed on the pod which were integrated into the main systems.   Like the shuttle pod, those original systems were not removed but left operational in case of an emergency separation.  A large pair of hydroponic bays were installed in the pod as well as a huge secondary water storage tank.  On Captain Archer's frequent and insistent recommendations, this secondary water storage tank was made accessible to the crew for both exercise and leisure activities.

Finally, emergency living quarters for up to 200 in cramped conditions were included both for humanitarian rescue missions as well as in case of catastrophic saucer section damage as part of its secondary life boat role.  To better facilitate this role, maneuvering thrusters and an independent life support systems powered by a microfusion reactor were installed that could maintain the pod's crew and systems for months when separated as well as backup or supplement the main saucer systems as needed.  Separation under ideal circumstances takes less than an hour including the movement of key supplies and equipment (like shuttle craft) back to the saucer section.  In case of an emergency, it can be accomplished in less than two minutes though.

The attachment of the pod, affectionately nicknamed the "pot belly" by crews, was a popular upgrade in the NX fleet as it significantly improved the quality of life on ships during extended mission durations.  From a practical perspective, the added mass and bulk was absent the negative effects on maneuverability, speed, or defense one might expect.  The addition of thrusters and the microfusion reactor on the pod counteracted the added bulk at sublight speeds whereas the modest improvements to power output and efficiency made during a simultaneously scheduled tuneup of the original warp reactor and plasma injectors made performance changes at all warp speeds negligible compared with the original design.  Hull plating as well as tactical systems on the pod were patched into the main systems and operated within the same parameters as other late NX era ships (although these systems were inoperable after emergency separation).  The actual attachment of the NXL module to NX class ships took less than a week in space dock with the majority of the time spent actually overhauling the existing propulsion systems in the original NX hull prior to connecting the pod.  Despite increasing the available usable space on the ship by over 40%, the added crew requirements for the pod were minimal at only a dozen extra crew compared with a standard NX ship.  This was because the added space was designed for uses that typically didn't require frequent or intensive crew monitoring (such as the hydroponics and cargo bays).

This design, despite its popularity, was only ever planned as an interim design until the deployment of the formal refit and as such always had an expected operational expiration date.  The refit with its much improved propulsion, navigation, and tactical system upgrades slowly phased out the NXL module over the course of a decade.  The construction of the newer Columbia class ships with the refit systems already integrated meant that those ships also had no need for the interim NXL modules either.  Despite its relatively short operational service life, it remains an interesting and successful footnote in the annals of Starfleet ship design on the road to the iconic saucer and secondary hull aesthetic.
Posted by SITZKRIEG! at 3:17 PM No comments:

The 2016 update to the Heavy Gear rules came out this past weekend.  While I didn't have a chance to go over the actual rules in any detail, I did take a look at the army construction chapters.  One major change is that the number of different UAs has been significantly reduced.  I'm glad to see this seeing as how I both privately (prior to) and publicly (post release) advocated strongly for that unsuccessfully back in 2013/2014.  With this latest slimmed down army organization, I decided to see if what I could do with my painted Blitz scale models and eventually my new Rafm scale collection.

A few years back when I was trying to demo and drum up support for the game, a player commented after an intro game while skimming through my rulebook that he was surprised to see more than just gears in Heavy Gear.  At first I was perplexed at the comment until I took a look at my collection at that time (100% gears) as well as the name and cover art of all the books.  Since then, I made it a point to include more than just gears in my forces despite my personal interests, especially in the forces I bring to demo.  Gears are still the overall main focus of my collection but not an exclusive one.  Additionally, I wanted to make sure I brought models that will use a variety of weapons, deployments, stats, and special rules instead of just frontline commandos backed up by backfield bruisers (my initial southern army).  If those weren't enough restrictions, space was also limited in my carrying case so all three forces had to fit in mostly a single foam tray.  From my collection, here are the various lists I came up with at 132pts (+-1pt) each after evicting some Robotech models from their foam slots!

Starting with the North, we have a Fire Support squad of two Grizzlies (including the CGL) and two destroyer Jaguars.  The Jaguars belong honestly more in an old time strike squad but the low tech but devastating explosive brute force weapons can also fit here in the Fire Support squad .  They'll likely be deployed up on the front lines guarding the 5th member of the squad, a support unit Cheetah.  The Cheetah recon gear is there to provide FO as well as some ECM support for the squad.  The second squad is a high tech strike squad of two Arrow missile Jaguars and two laser sniper Flash Jaguars led by a Cheetah.  To round out the three activations, I have a platoon of four anti-tank infantry squads.  With this force, I've got a representation of indirect fire (guided and normal), some advanced weapons like lasers, infantry and their unique rules, and some solid electronic warfare.

Opposing them is my Southern Republic gear regiment.  I went with extremes here in that I took both the most basic gear squad (GP) along with two of the most elite options in that army.  The five Jager GP squad includes some grenade launchers/LAC combo rifles as well as light bazookas and are led by a command Jager.  This was important to me as I didn't have any "trooper" class gears like the hunter in my northern force.  Backing them up is a strike squad of two bruiser King Cobras with their haywire damage causing particle accelerators.  Finally, we have a special forces stealth squad of two three various mambas and a chameleon recon gear.  This squad utilizes both the stealth and paratrooper rules potentially in a game.  I'm still a little bit hesitant to include the stealth squad though as the previous Blitz stealth rules just made the game not fun when used.

With these three armies, I've got a variety of weapons represented as well as all but one of the major classes of the titular gears.  Flanking, airdrop, and normal deployment is represented along with special categories of rules like stealth and electronic warfare.  Finally, nongears are shown as both infantry as well as tanks are included.  I attempted to include support options like turrets, conventional tanks, and aircraft alternatively in the southern force as well as an APC in the north but neither the points nor the remaining available foam slots worked out.  I'm also missing a strider in a list as well.  I had initially planned to use my Rafm Kodiak as a blitz gearstrider but there are lingering questions about his size relative to the orginal model on top of the fact that couldn't fit in the case without removing more (necessary) robotech demo models.  I may eventually revisit that decision though in the future though.  Next up will be my Robotech demo lists and models that I keep in the same case.
Posted by SITZKRIEG! at 3:09 PM 2 comments: