A while back I finished my first of the 3D printed Mass Effect figures but never got around to photographing him.  I'm happy to report that in person the facets from the 3D model printing aren't visible at all at any normal distance and I dare say that their visibility is also reduced even in the zoomed in flash photography below as well.

As with my previous fig pictured next to him, I decided to embellish the paint job with the closest things I could find to Blood Pack markings, 40k Ork decals.  I'm about half way done with the sniper figure as well from my second batch but I just can't get the paint job to look how I want.  The fine details evident on the printing really are shallow and I'm not happy with how they're turning out so will probably be stripping the fig and restarting it sometime this week.

I've also stumbled accidentally across an RPG conversion that is exactly what I was looking for in the first place... a Mass Effect total conversion of the 5e D&D ruleset.  I had been considering doing something less ambitious myself with either the Shadowrun or Eclipse Phase rules (and in the past had even done some preliminary work in that regard) but nothing on the scale that the folks at the link below have been working on.  If you're interested in Mass Effect and like the 5e ruleset, definitely check them out as they've got gear, biotics, aliens, and almost everything else worked into playable rules!

As a final tidbit, I posed my Krogan mercenary up with some other figs I've had for a while.  It seems that he was hired to explore some rumors of a Rachni hive and collect an egg for hit patron to sell but has found something much worse!  :) 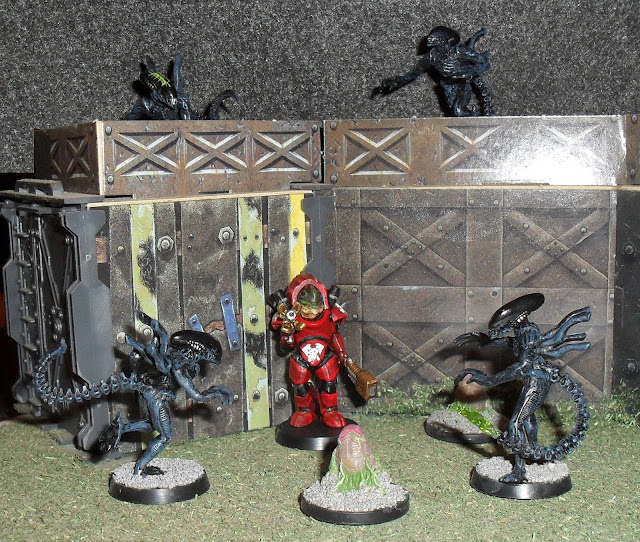 Posted by SITZKRIEG! at 5:09 PM No comments: