After noticing that my eyes somewhat awkwardly were drawn to the Captain Morgan prominent hip and crotch pose of my Commander Farsight conversion, I decided to tweak the pose a bit to decrease the hip joint angle there.  I also decided to take the middle ground in relation to the ribbons and instead added the bonding knife to the hip with the ribbons pointing into the front view instead of adding all the cloth bits.

For the second model in the small ally force, I decided to try and model the special character Commander Brightsword as a younger subcommander shas'vre model leading a crisis squad.  I did a couple of blue tac mock ups of this model with various arm poses and even different weapons (swords in the hands vs blades under the forearms for example) and decided to go with the following.

The in game loadout for this model will be a shas'vre upgrade to enable access to the fusion blades signature system along with the prerequisite twin linked fusion guns.  I used some long barrelled fusion guns from a turret I converted to a aegis defense line gun to give it a bit more menacing look as well as reposed the legs to give it a leaning forward running pose as well.  I plan on finishing this project with two additional crisis suits with a fireknife pattern (plasma rifle and missle pod) to fill out the mandatory squad.   Here is a group pic of the two built commanders:

Converting Models For the Greater Good!

Sorry about the delay in posting but frankly I haven't had too much to update until this weekend.  My hobby funk has for the most part continued as I did a few more base colors on my Ferrus Manus conversion but no part of him other than the cloak are finished.  I'm having a hard time finishing up the models (painting) but I did get up enough enthusiasm up after checking out some of my favorite hobby blogs and youtube channels for inspiration to build/convert another model.

I picked up in a trade some Warhammer 40,000 Tau Crisis commander suits that I'd been wanting for two years since they came out.  I really like the extended look of the models compared with the squat almost chibi look of the previous plastics.  The forgeworld variants that came out a decade ago are a marked improvement over the plastics but the sculpt on the "new" commander is definitely my favorite.  I decided to convert one into a Commander Farsight model as I'm not a fan of the official one.  The cloven hooves strangely bother me (but the weird toes don't!) and the pose and ribbons seem at odds on the model.

This was only my third ever finecast model worked on and they've definitely improved on the QA and casting quality in the years since they introduced it.  Unfortunately, the bar was set so incredibly low that even marked improvement still puts the finecast material in the substandard category IMO compared with other companies' resin offerings.  While the giant detail obliterating bubbles are largely gone (at least from the last two models I worked on), there are still alot of uneven surfaced that should have been straight and which require careful trimming next to easy to lose details.  Some pieces didn't fit right so had to be warmed and straightened.  Each piece had double the number of LARGE vents compared with resin both from GW's subsidiary Forgeworld as well as Dream Pod 9's Heavy Gear line.  Both torso corners had bubbles on my model (one on the crisp corner and another enlarging the notch seen above on the right chest) as well as more on the top of the model.  I lucked out in that the biggest flaws on the chest that would have been the most difficult to fix were actually obscured from view by the arm poses described below.  I'd rate finecast right now at about a C+ grade compared with the previous F that it deserved as it is still markedly more troublesome to prep, fix, and clean that comparable materials and offerings.  It's a bit sad because I think the sculptor knocked it out of the park with this particular model.

Getting back to the actual model, the key defining feature of Commander Farsight in the tau army and model range is his focus on close combat.  I decided to use a spare sword from a 40k Eldar Wraithlord kit to arm my conversion model. I've seen a bunch of folks use the rather large sword for the conversion for years but I've only ever seen one model that was built using it as a large two handed sword instead of in a single hand.  It took some creative clipping of the elbows and posing but the sword and the troublesome limbs finally lined up in the correct shape.  The original model has a leaning back pose which didn't fit with the whole samurai robot motif so I decided to give him a bit more leaning forward and aggressive pose.  In order to properly position the leg, I needed something to prop up the foot adecided to use a spare rock rubble piece left over from Ferrus Manus.  After incorporating that on the 40mm base, I actually came up with the idea of using the rest of the leftovers from my primarch to surround Farsight with marine casualites.  I plan to magnetize the scenic display base to snap "over" the game legal 40mm one. 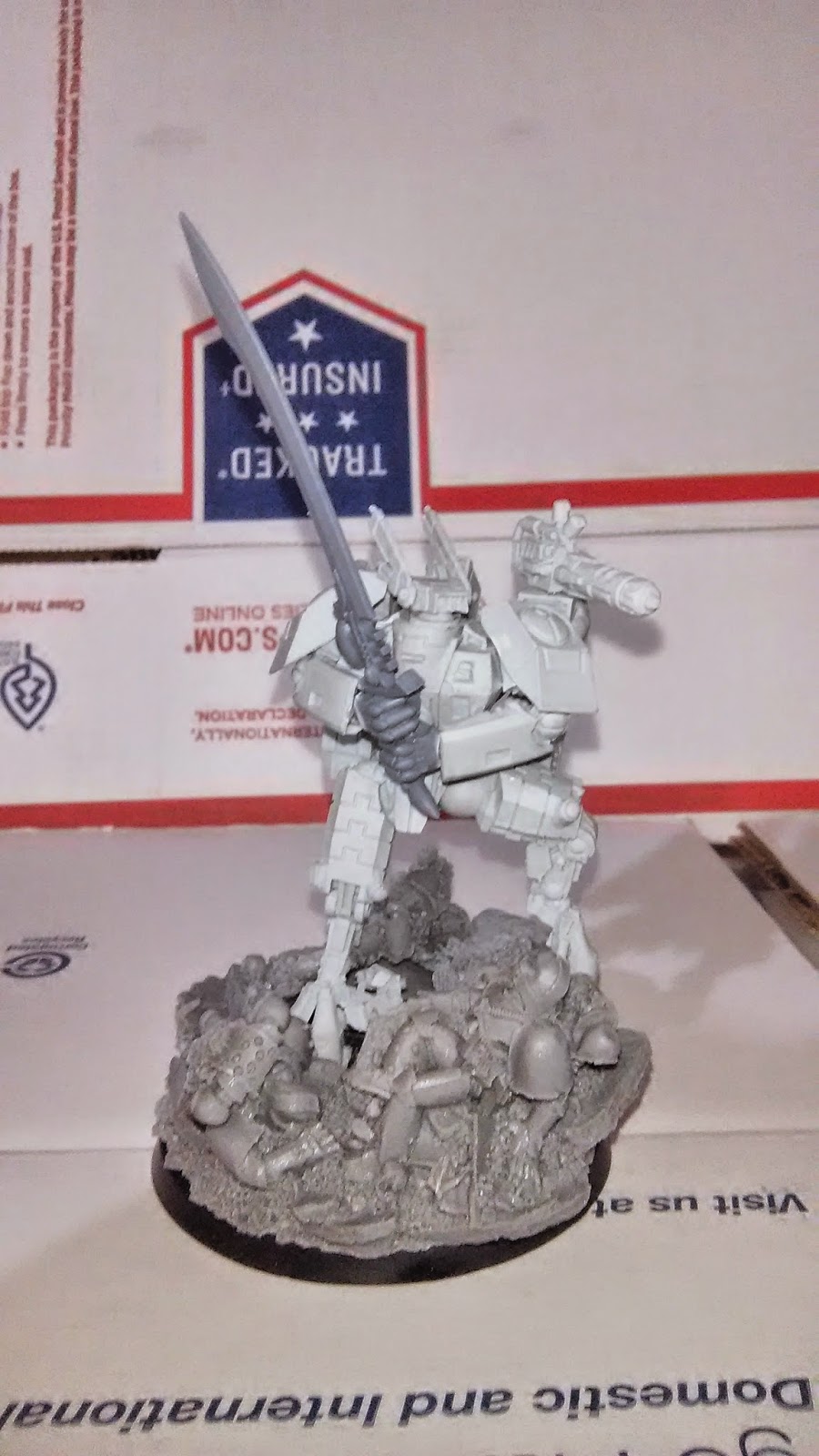 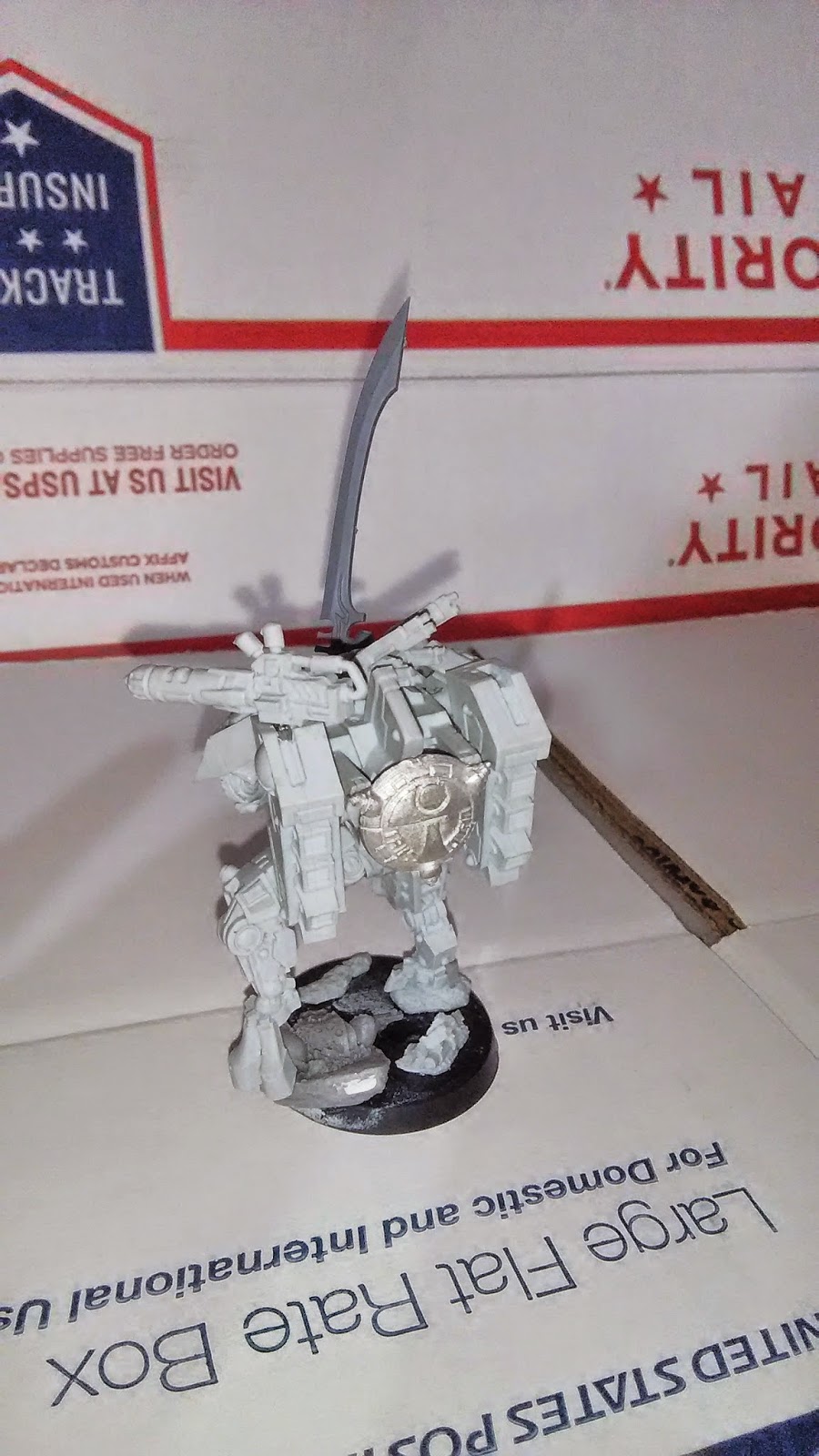 He's armed with the large alien tech sword, a shoulder mounted plasma rifle, and the shield generator fixed to his back powerplant.  Here's a pic of his next to some other Tau and 40k models for a size comparison: 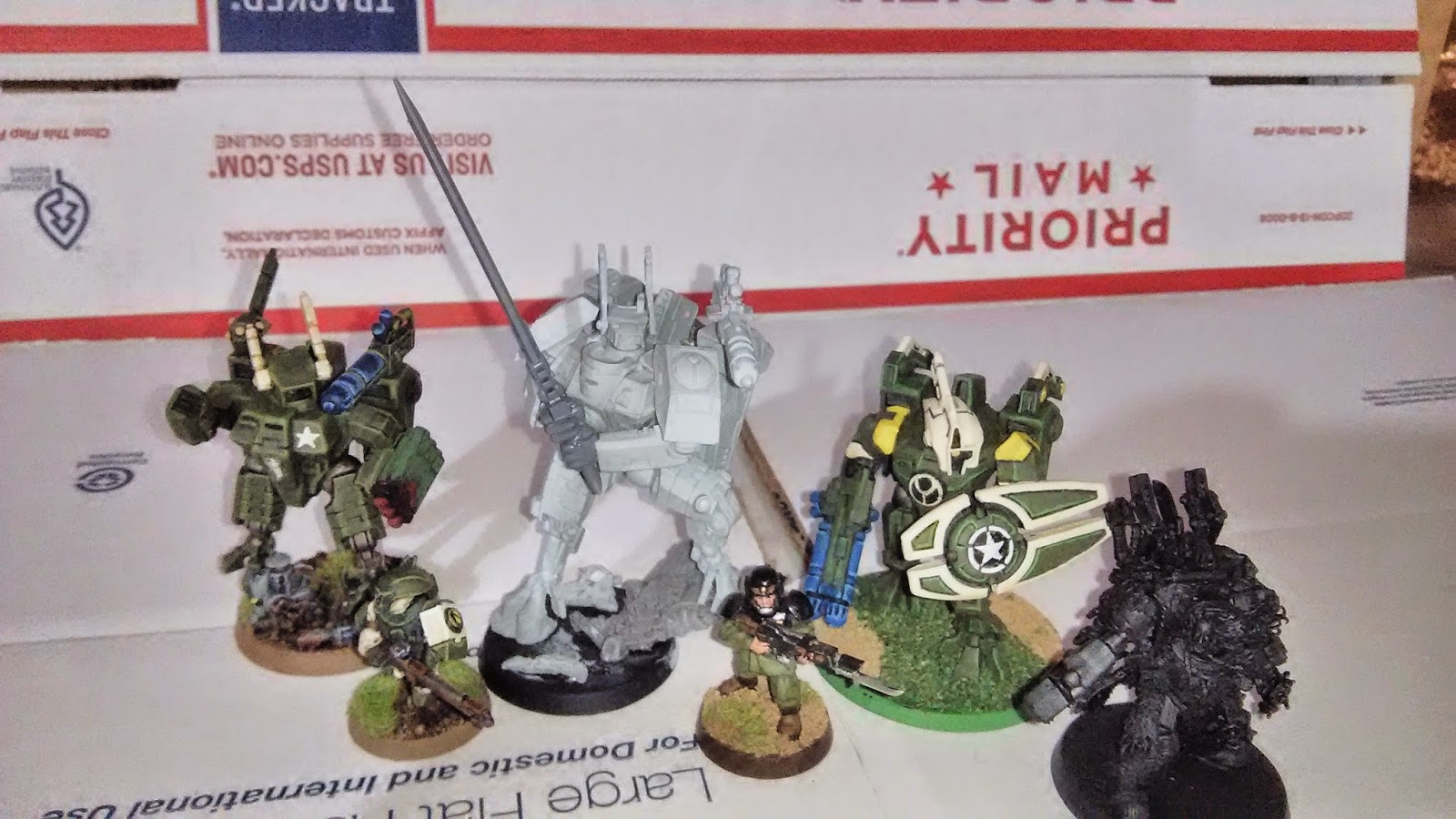 You can see that the newest crisis variant is less "squished down" than the others (the original plastic suit on the left along with a Forgeworld variant character on the right).  I like that it finally looks like the Tau infantry figure can actually fit in the chest of the crisis suit in something other than a 3rd trimester fetal position!  Of course, I'm a bit of a nut for proper scaling in 40k as this blog shows so you'll have to excuse my bias.  Let me know what you guys and gals think and what can be improved.  I'm debating whether or not to put a loincloth and some cloth draping on the model to honor the original "ribbons" festooning the official model but I'm frankly not a fan of the idea.  My marines are already festooned with stuff like that and I rather enjoy the more clean and practical look of the Tau.. or at least as practical as you can get with a flying giant anime robot armed with a big sword.  :)

Posted by SITZKRIEG! at 4:58 PM No comments: