As mentioned in the last post, I attempted to accentuate the details on the model that weren't likely to print successfully like rivets and thin armor plates.  When zoomed in, the 3d models look pretty good! 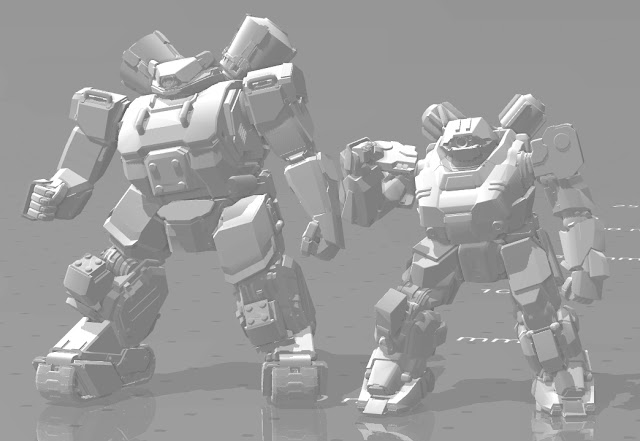 These were an absolute pain to support properly but eventually after a few hours I was ready to print despite multiple crashes of the slicing program.  The print didn't have any obvious failures but it looks like both the depth of details and the overall scale aren't dialed in yet. 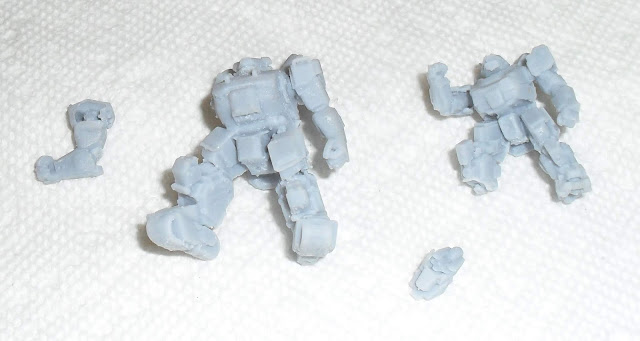 The print was done at 50 micron layer height with anti-aliasing enabled which normally turn out better than shown above.  The smaller Hunter XMG looks to have crisper corners but both could use some improvement in that regard as well as further thickening of details when possible.  Additionally, they're a bit bigger than I expected compared with the official models.  The hunter is simply too big but the grizzly is a bit too wide (though the height is good).

As you can see in the unassembled picture, I did have an issue with weak joints on the models with a limb fracture on each while attempting to remove the supports.  Admittedly I could have been more gentle but there were a TON of supports to remove and I had to pull off areas of light supports as a group when possible.  The supports under the groin and butt plate were so thick that they were effectively a solid scaffold a few millimeters away from the surface of the model instead of a series of vertical trunks.  I've never had fractures like that in the past using the same technique so I definitely think the modular nature of the models (as opposed to models that are one piece) contributed to the weakness. On the plus side, I do think that the overall look of the models is good and will fit in with the other HG figs I have both in the Blitz scale shown above as well as the older RAFM scale that I've covered previously.

To cut down on the density (but not total number!) of supports needed, I've separated the models into a trio of parts each(engine, upper torso, lower limbs).  I've also done a third round of thickening of details like the rivets, hip armor plates, and antennae so that they'll be more stable and obvious.  Finally, I'm adjusting the individual dimensions/proportions of the models overall to better resemble those of the official models.  I hope to have positive things to report with my next round of printing this weekend!

Recently, I was toying around with 3d modelling when I decided to try and extract the 3d models from the Heavy Gear Assault game.  Unlike last time, I was successful after an update of the programs used to accomplish it!  After looking through the models and animations, I settled on their Hunter and Grizzly models.  Both look significantly different from the original RPG and tabletop versions but luckily had "advanced" updates in the fluff that they could represent.

The Hunter was the simplest as it had a prebuilt model in the files so I started with that one.  I went through and removed various bits and bobs that are unlikely to print at such a small scale (whether Blitz or Rafm) as well as thickening up things that need to stay but have similar issues.  I added some extra details to make it more like the XMG like the head comm vanes and the shoulder armor ram plates (from Lego bricks!) as well as virtually kitbashing the MAC and rocket pod.  I also replaced the in game riot shield with another from thingiverse instead. 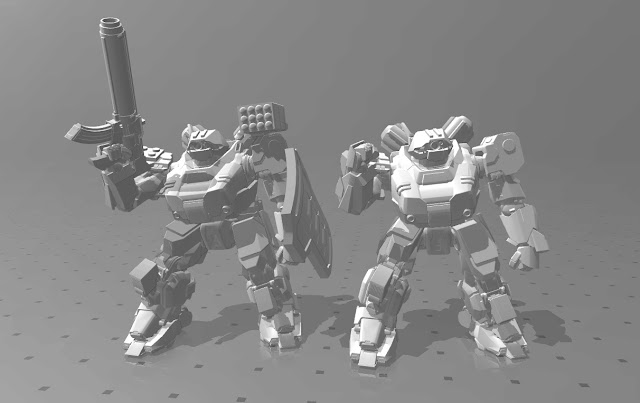 The grizzly was more difficult in that it needed to be preassembled from individual parts due to the in game armor damage and customization systems.  I went through the same process with this model to instead turn it into a Panda upgrade.  More parts were free-floating and  disconnected in this model so hopefully it will print ok when that time comes.  With the Panda, I needed a very heavy autocannon (think 40k assault gun or scifi chaingun) and I kitbashed one from a Titanfall weapon and the ingame gun.  I was hoping to give it a more angular look since it's a northern gear but hopefully it's still obvious enough as to what it is.  Similarly, I assembled from various parts the larger rocket pod and put it on the shoulder as it couldn't fit in back with the heavy mortar.  I also cobbled together tracks for the feet as they were missing (maybe they're a texture image file in game?). 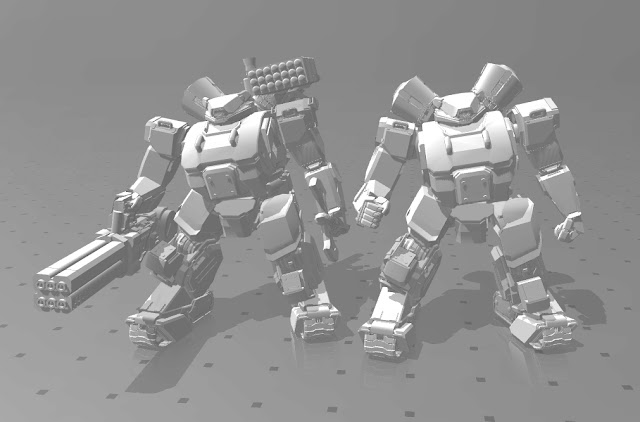 Surprisingly, the pc game has both gears built on pretty much the same height skeletons so I decreased the size of the Hunter XMG by 15% to give me what turns out to be RPG artwork accurate relative heights between them (thanks Alberorius!).  With Ashley's help with RAFM measurements, I'll compare them to the RAFM physical models as well as the Blitz scale ones.  After a few more cleanup inspections, I'll be trying to print them out hopefully this weekend.  Wish me luck! 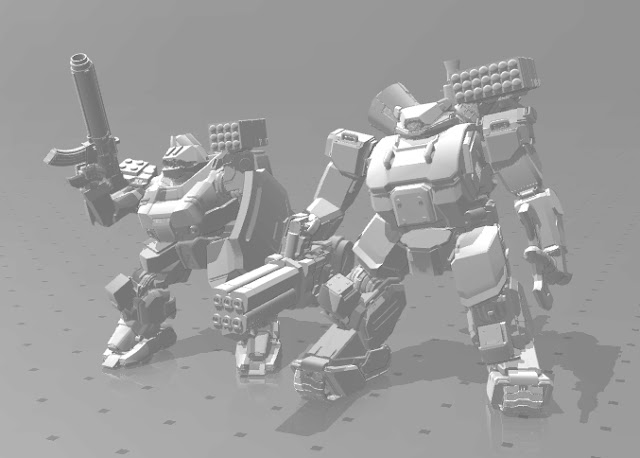 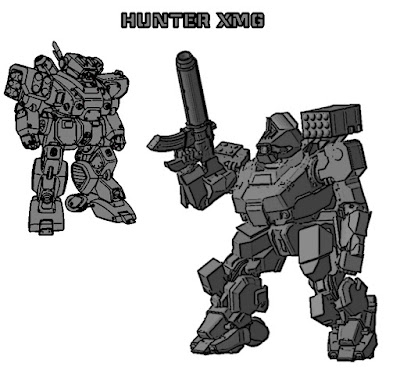 Recently I've been working on posing and tweaking a Hunter 3d model from the defunct and incomplete Heavy Gear Assault game and the effort has surprisingly made me nostalgic again for the IP.   I've been both constructive (with my Heavy Gear Flash! house rules) and critical in the past on the blog but never really explained why I became interested in the game initially and still am despite their efforts to the contrary.

When the game came out in 1994, my only real experience in gaming was basically limited to a small handful of games.  The Rifts and Robotech rpgs by Palladium books were my gateway into the hobby and on the minis side I mainly played a very niche hand typed and bound historical/fantasy ruleset called Spear and Shield along with the FASA Star Trek ship combat game.  I had some minor experience with other big name systems like D&D 2nd edition, Gurps, and Warhammer (both FB and 40k) but they were typically one time experiences like demos that didn't catch my permanent interest.  I was familiar though with Dream Pod 9 from their work on Palladium's Macross 2 RPG supplements as well as their Mecha Press magazine.  I really liked their overall style and modern (for its time) art filled desktop publishing layout which was a huge break from the simple typed hand layout with the occasional single piece of art per column or page style that was the baseline in 1980's RPGs.

In the spring of 1994, I started seeing advertisements for a clearly VOTOM inspired RPG and miniatures game called Heavy Gear by the same company.  Being a fan of VOTOMS (or more specifically the Scope Dog designs), I was really excited for it.  Better yet, it was premiering that year at GenCon and I was already planning on going to the convention for the first time!  I signed up for multiple sessions of the game and enjoyed them all.  The RAFM lead miniatures used were both affordable and a great representation of the consistently great art by Ghislain Barbe.  The RPG and tactical rules were a single purpose built ground up coherent system that was a breath of fresh air from the typical core D&D style fantasy systems with scifi elements crudely bolted on that I was used to.   It really was the perfect combination for a cashed strapped part time employed student gamer who was into mech-based anime as well as both tabletop and RPG games!  I was hooked that weekend and picked up every book for several years and most minis for my chosen faction (the North) as well as a smattering for the South.

It may not seem special nowadays but it really did feel revolutionary at the time for me compared with what I was used to.  Something as simple as the paratrooper gears (like the Hunter Commando above) excited me to no end.  I'd look at the miniature and see cool things like roll bars, padding, and air brakes that made a design I already liked different but varied!  When I looked at the rules, they actually reflected those changes in a coherent way both in the miniatures and RPG game via rules like the airdroppable and rugged movement system perks that were developed long BEFORE they were needed.  This wasn't just another throwaway line in a random piece of equipment but rather something practical that seamlessly meshed both with the backstory and mechanics.  It was clear that alot of effort went into building all this way before the first product came out and it showed.  It's been that initial love of the game and the world that has kept me periodically coming back in for over 25 years.
Posted by SITZKRIEG! at 9:37 PM 7 comments: