It took me a while to get the first layer of paint on but slow and steady work over the last two weeks has finally gotten my first hobby project of 2015 (yeah, I know...I'm really late!) close to completion.  Here is my Commander Farsight conversion along with a full squad of crisis suits to keep him company (as well as make a legal 40k Ally force).  You may notice that the squad commander with the twin shoulder/jet pack weapons lost her swords since the last post.  Unfortunately, they were too fragile and pieces broke off twice while painting.  Despite partially pinning them (only partially due to some small pommel sizes), parts were knocked off both while holding the mini for painting as well as when the model fell over after a painting table bump.  Mechanically, I can still use the same in game upgrade I planned but I will miss the visual flair the twin swords provided.  I went with the traditional US WW2 green khaki color along with some gunmetal and brass trim.  For the shoulder and leg color accents, I tried to evoke a bit of the D-Day landing stripes you see on WW2 aircraft to break up all that green. 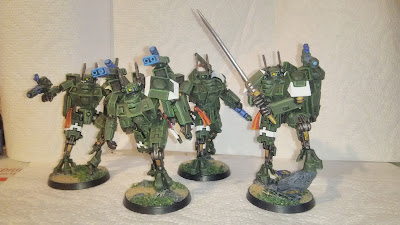 I just finished the bases prior to posting this so the models are currently drying.  The next step would be a quick gloss coat and then the decal work begins.  I'm frankly not sure how far to go with the decals.  I'm definitely adding the US white star decals and a US flag from the Flames of War decals below to match both the theme and my existing related Tau army but I'm waffling as to how much more to add.

I'm considering adding the red and white triple stars to the Commander Farsight model to show his "general" rank status but I'm not sure about the rest.  The same FOW decal pack has alot of nose art style names that I'd like to customize each suit with.  For instance, they have a "Blood n' Guts" decal that I could put on my commander ala Patton.  I'm not sure where to put that though (the forearms like a tatoo, the "butt" as that side is pretty sparse on detail, the top of the jet packs, etc).  The side chest is obscured too much to make it worth it frequently and the head is too small so those two options are out.  I also have another decal pack that has a ton of warning markers on it that I'm thinking about using. 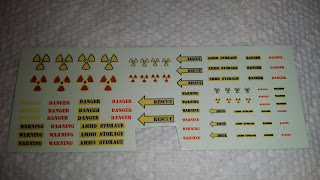 Placing the radioactive marker on the powerplant between the jet pack thrusters is one idea as are putting the danger and warning symbols on the jet packs and weapons (along with the rescue possibly on the chest).  These decals are not precut so they're quite fiddly to work with and very easy to screw up which is one thing going against them.  The other thing is that I'm worried about making the model appear too busy like it belongs in NASCAR.  Any thoughts on the subject would be appreciated.  Probably tomorrow I'll start on the decals that I absolutely know I'll use and where so I should have another update on these models later in the week.  As always, thanks for reading!