I got a bit more done with my Halo UNSC fleet so I figured it was a good point to stop for a bit and post a quick review.  Just in case it comes up, I was not reimbursed for this review but got the kits on my own.  If anyone from Spartan Games reads this, I wounded certainly not be opposed to recieving and reviewing further kits.  :)

I started with the UNSC human fleet first.  Overall, I'm very impressed with the kits and sprues.  The sprues were very well laid out and labelled with very little confusion in assembling the models.  The one time I had a question that wasn't clear just from looking at the parts and finished model, the answer had its own little box clearly the orientation needed for the parts.  Small details like recessed Battlestar Galactica style fighter launch and landing bays were hidden under the forward wings of the carrier model. 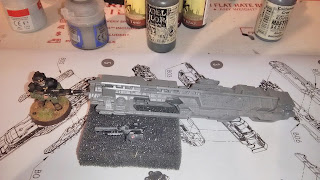 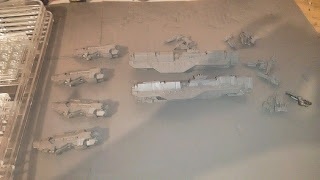 So far, my starter fleet will consist of two large carriers, four medium cruisers, and four stands of three frigates each.  For potential demos, I can divide the force in two.  Small fighter combat is a big interest of mine in space games so I'll be using left over Babylon 5 Fleet Action scale Earth fighters mounted multiple on each 20mm base instead of just counters.  I've also decided to lighten up my proposed two grey paint scheme from the previously posted pic by one shade.  Later tonight I'll be testing out my various washes to see which ones will make the panel lines pop out the most.

Posted by SITZKRIEG! at 7:17 PM No comments:

Sorry about the big break in posting but frankly I haven't had much hobby progress to report.  I'm largely done with my Tau Farsight ally force except for two Remora drones and the rumors of an upcoming codex this past summer put a hold on future purchases until I could see the new rules.  The rumors are now fact as two of the new upcoming models have started to get official previews so I'll revisit my Tau again in a few weeks to see how/if I can use the Remoras as something official from the codex.

In the meantime, those sneaky Brits came out with another nice game that caught my eye and scratched an itch I didn't know I still had for over a decade.  Halo Fleet Battles came out and the minis were nice and I've been a longtime fan of the universe (games and books).  The price point for a starter is a bit high but I got a good trade done for the game with my existing pile o' shame.  I did some quick initial test pieces to see how my ideas for a paint scheme would work.  I planned to do the Covenant in a new Tron style look whereas the UNSC would be a rather typical two tone grey.  Both would use my left over Robotech decals. 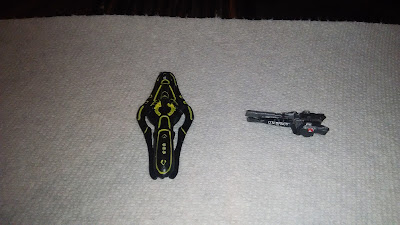 The tron scheme turned out to be alot harder to pull off than I initally thought without an airbrush.  The yellow in the pic is actually alot brighter in person (crappy picture lighting) but I do think I overdid the decals on the ship.  The UNSC bigger ships would get more edge highlighting than shown above (the ships there are 1-1.5" long... tiny!).  I hope to get at least my UNSC initial fleet assembled and painted up in the weeks to come.  Hopefully, in the meantime, I'll find an opponent to actually play against!
Posted by SITZKRIEG! at 12:05 PM No comments: