It's been over a year since I started making unoffficial stat sheets for the classic FASA game and I decided it was time that I combined some of the fan ships into a themed single download for ease of use.  Since Bill Krause's Sentinel is the ship that got me restarted in my Trek fandom, I couldn't think of a better cover model than her!  Thankfully, Bill was kind enough to let me use his model images again (and as a side note, one of his other fan ships is now in the 2018 Ships of the Line Star Trek Calendar!). 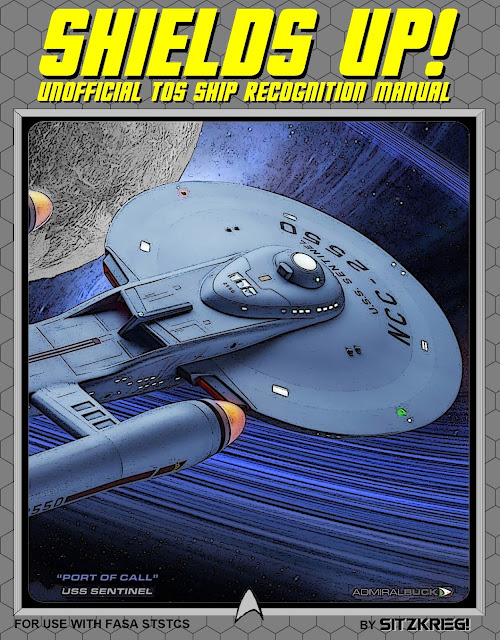 
Included in the PDF above are eleven TOS era ships (most created by fellow fans) that I've published previously on my blog including one Romulan and one Klingon design as well as the ship counters that I recently put out. Special thanks to all the talented artists who have graciously allowed me to tweak their images (for the worse!) into the FASA style as without them I'd just have some walls of text and a few columns of stats. I'll still be publishing new unofficial fan ship sheets on the blog here in the future (and the TMP and even TOS ones that didn't make it into the first supplement will remain on the blog). If anyone tries out any of the ships on the tabletop or just has any questions or comments, feel free to leave them below. Thanks and enjoy!
Posted by SITZKRIEG! at 8:00 AM 5 comments:

Apologies for the microupdate for a single fig but I received some feedback that the wings made the models look unbalanced (which was literally the case as I had to blutac a foot down because the model kept falling over in one of the pics above).  I tried cutting off the exhaust nozzles on an old space marine backpack and test fitting the wings directly to the side sandwiched between the pack and the nozzle but it frankly looked horrible and wasn't even worth going upstairs to get the camera.  I then thought about revisiting the old idea that I came up with for my 54mm Artemis model of jamming it in between the pack and the torso. The curved wing had an odd number of wings in the kit I bought so I sacrificed the odd man out by clipping the bottom quarter of feathers and thinning out the frame they were attached to.  Since I only have the one piece that I was willing at the moment to carve up, I took two pics with the same wing in both positions and then digitally combined them in MSPaint (no Photoshop in this budget build!).  I definitely prefer this to the back mounting at least for the curved wings. 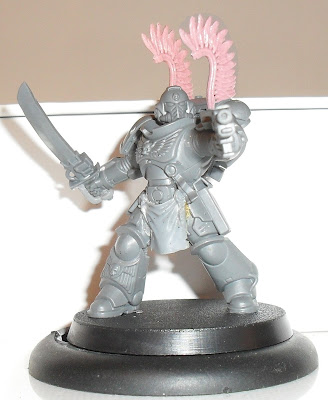 
I've taken a long break from doing actual physical hobby work with about a year's worth of pure house rules on my blog is testament to that.  While I'm not keen on the way the Primaris marines were introduced in the background, I rather do like the basic Intercessor figs themselves.  I've made numerous truescale attempts here in the past from deathwatch to space wolves to even primarchs  so it didn't come as a suprise to me that I liked the IMO better proportioned primaris models.  At first I thought of restarting my old Space Wolf truescale project with the new primaris models but there are folks that I've found that are doing that much better than I'd ever be able to (like this and this).  Additionally, I wanted to try something new as well which only cemented my decision.  Instead, I decided to revisit an idea that I ten years ago regarding making a custom chapter of Winged Hussar space marines.  Winged Hussars were a Renaissance era heavy cavalry unit for the Polish Lithuanian Commonwealth named after the prominent feathers attached to frames on their back.  They wore suits of plate armor and were equipped with lances and sabres. 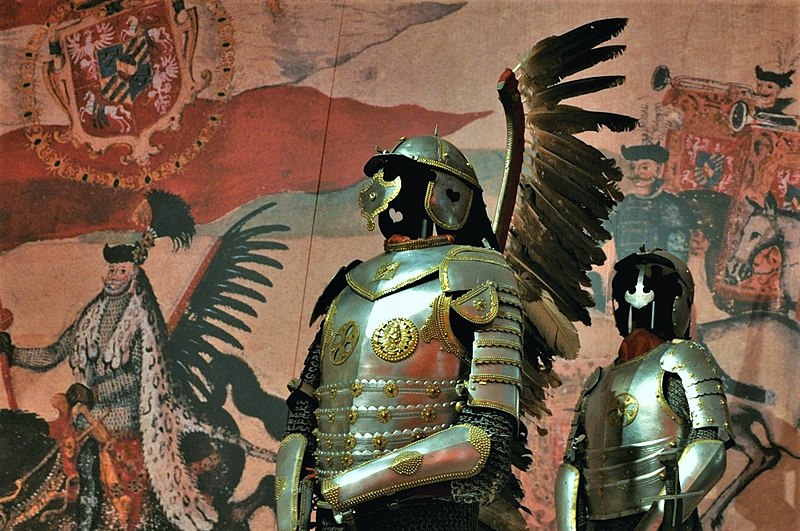 When I came up with the idea years ago, the only readily available bits in 28mm 40k scale were the Dark Angel Ravenwing bits which were too large for infantry figures (but were a good size for the 54mm Inquisitor Artemis figure that was also a brief resurrection of the idea for me a few years ago).   Since then, 3rd party bits makers like Maxmini and Puppetswar have produced compatible "wings" and other accessories (especially Puppetwar as they're based in Poland) but they were a bit too scifi for the asthetic I was going for.  Recently, I found some smaller scale historical kits from European manufactures that might fit better both asthetically and sizewise.  I picked up two of the sword wielding Primaris Lieutenants with the goal of making a Winged Hussar character.  Working from that basic figure, I swapped out the power sword for a custom built sabre made from a heat curved Grey Knight sword with an old chainsword pommel.  Additionally, I trimmed down a small tabard and added it to the figure.  Regarding the actual wings, the Zvezda kit that I got comes with two types, one straight and one curved.  I blu-tac test fitted both as picture below as I'm not sure which one I'll choose (although I'm leaning towards the straight variety). 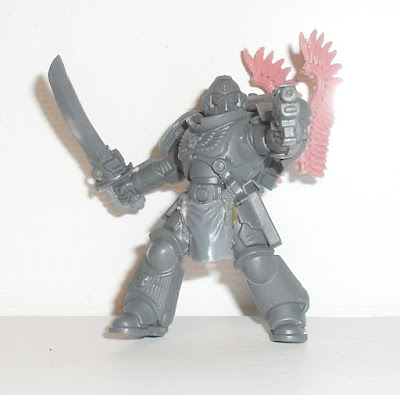 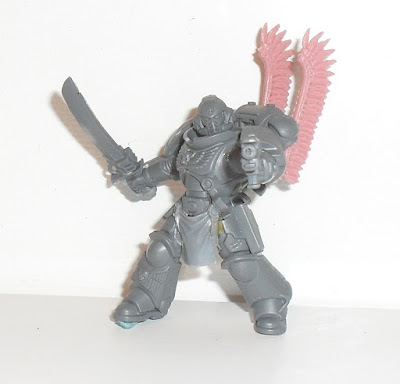 The plastic on the wings is definitely different that GW style polystyrene as it is glossy and more brittle and reminds me a bit more of the Robotech RPG Tactics plastic.  I'm test fitting some of the sprue bits with my Testors plastic glue to make sure them work.  Some other (expensive for one fig!) ideas I'm thinking about is getting some of the Puppetwars Hussar sabres and Cossack heads to give the model even more of a customized look.

They do have hussar specific helmets but I'm not sure of the size and not frankly particular to their look either.  Thanks for reading and if anyone has any comments or advice then feel free to share.

I came across this design a while back when it was introduced in Star Trek Online game.  I thought the original designer, Hector Ortiz, came up with a very cool use of a faux quad nacelle design and figured it might be a good addition to the FASA lineup as a TOS era battleship (since they don't have dreadnoughts in the FASAverse technically).  Since I haven't gotten the ship in game yet myself, I decided to look for some fan art online that I could possibly use.  Eventually, I found anotherthing's thingiverse page on which he had posted 3d printing files for the ship under CC license! 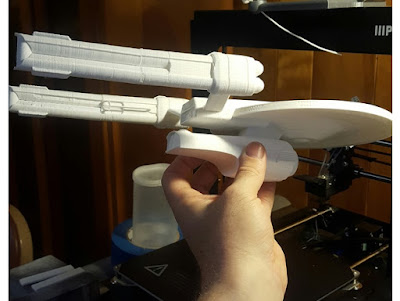 The parts were split up like legos for each home printing but I was able to put some of them together and then combine the screenshots to a cohesive ship that I was then able to embellish and FASAify.  For the stats, I debated just how powerful I should make this and whether or not I should break the construction rules and/or come up with my own equipment.  In the end, I decided to use the rules exactly as written but introduced the FWF-1 engine three years earlier than stated in the fluff.  To further show the "prototype" nature of the engines, I gave them the less efficient 5/1 movement value instead of the improved 4/1 stats the later Constitution Mk III has.  In the fluff, trinary shields at that point in time are available but unacceptably (for Starfleet at least) unrealiable compared with their less efficient binary counterparts.  There is no "reliability" stat in FASA so I bumped up the superstructure by a few points (which I had been planning to do regardless as a battleship) until the ship was class XII which lowered the max shield value compared with other heavy cruisers that would later use the same system.

In any case, here is the final product that hopefully is worthwhile to use within its own niche.  As always, the PDF link is below the image version of the sheet and feel free to comment. 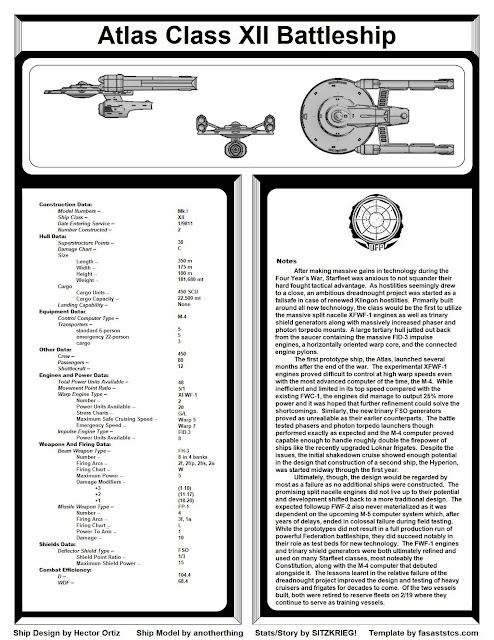 Atlas Prototype Battleship/Dreadnought PDF link
Posted by SITZKRIEG! at 8:00 AM No comments: