And now we get to what I unfortunately did not finish during 2015 as planned.  First up would be my long planned but stalled 28mm VOTOM/Heavy Gear squad. 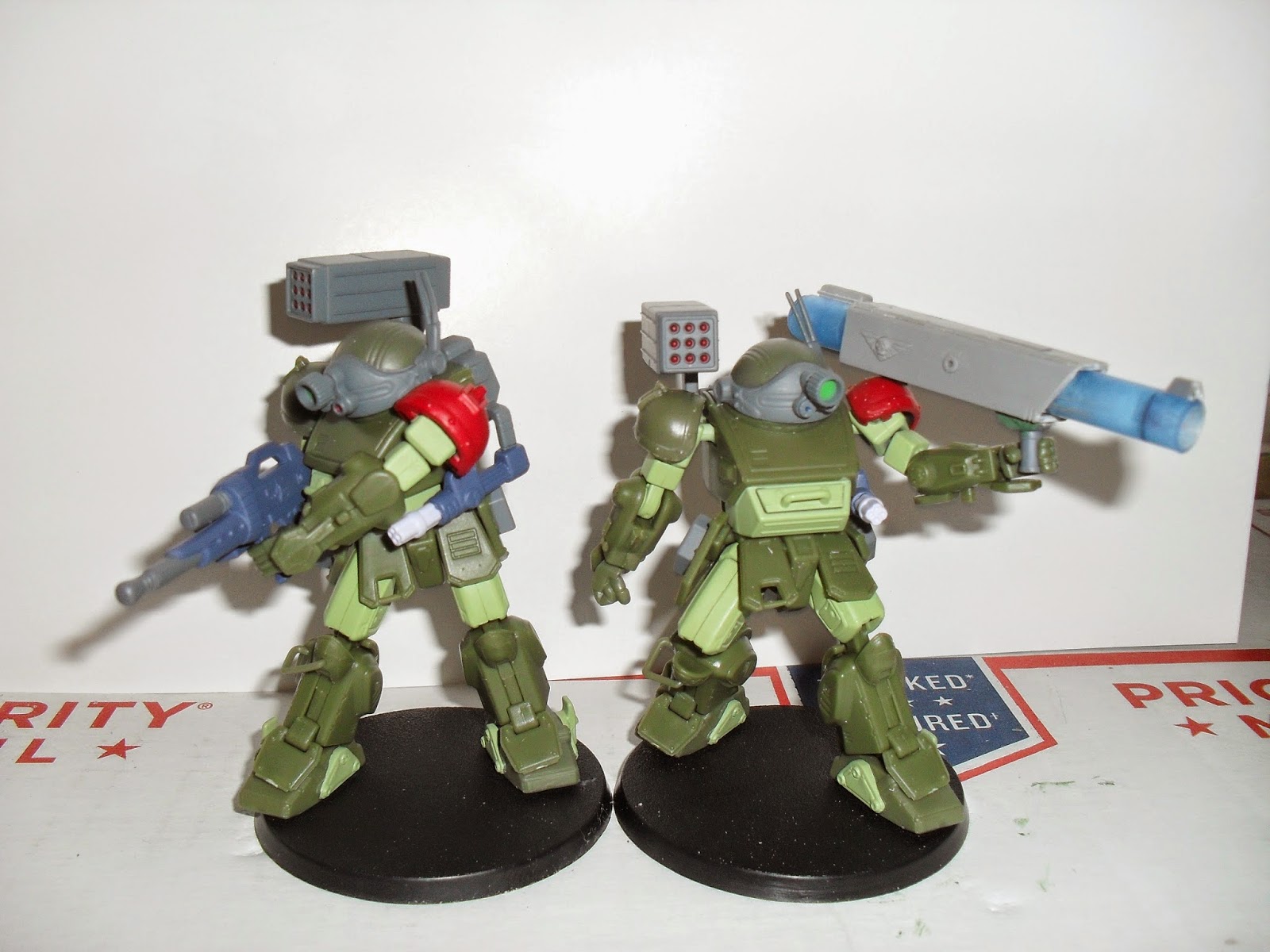 While I did try a few paint schemes and techniques like traditional painting as well as washes/drybrushing, I never got the models to quite look how I wanted them toand stripped them down.  I dont think I ever covered it here on the blog but I also converted a snub cannon for the fifth model as well as some extra comm gear for the Jaeger Command squad leader.  I still plan on working on them eventually but the wait and see approach to the Heavy Gear kickstarter I took somewhat drained my enthusiasm for the project.  Perhaps the potential fulfillment of the rewards this year (delayed four months or more so far) will have the opposite effect.

The second project that I had planned but didn't complete was my small Space Wolf 40K Primarch ally force.

While I didn't touch Logan Grimnar on the right, I did a few coats of grey and some metallics on the Iron Priest on the left.  I again wasn't quite happy with the preheresy scheme effect I achieved but I also wasn't unhappy enough to strip it off either.   We'll have to see if I end up able to salvage it in the end.  Like the VOTOMS above, I don't really have a practical use for these in any future foreseeable game so they'll likely stay on the backburner for a while.

Finally, I'm back to what was posted on my last real hobby update and my first really hobby work of the new year...my 40K Tau Broadside conversion.

He's currently primed green with recesses washed black and ready to paint.  With even my glacial pace of painting, I should be able to finish him completely this month and be done for a second time with my Tau side project.

After that, I'm not sure what I'll do in what order in 2016 but I do have a few ideas knocking around my head.  The easiest would probably be a set of house rules for improving (hopefully!) the effectiveness of fighter/bomber wing combat in Halo Fleet Battles as well as incorporating the boarding actions into the normal mechanics of the rest of the game instead of being entirely separate.  My tentative name for the house rules would be "Their Finest Hour" and I hope to start posting them next month.

Besides my two main stalled projects above, the only hobby work I've got planned is to repaint one of the new T-70 xwings in Poe Dameron colors after seeing the movie.  While I thought the movie was better than the prequels, it didn't entirely captivate me as I found most of the characters uninspiring (except Ray) and the plot too derivative of the original movie.  I did however like the battle scenes and especially the new xwing both in design and Poe's color scheme.

The other thing I'd like to do more of in 2016 is actually play games.  For a variety of different reasons, I only played a grand total of 4 games in all of 2015 from all game systems combined.  I'd probably focus on Halo if given a choice with the upcoming house rules needing some real world testing but I'm not particularly picky!  I'm not sure if my cellphone camera is up for it but I'll likely post battle report videos of any games I play this year both on youtube and linkef here on the blog.

Thanks as always for reading and I hope I didn't cause anyone to nod off while reading!  I've been pecking away at my tablet typing this so I apologize for any typos as I'll hopefully correct them in short order.

I had initially planned on doing a detailed review of the year 2015 but something derailed my plans... netflix!  I had gotten a membership to the service for Christmas and ,instead of working on the final hobby project of the year and the year in review post, I've been watching things like Knights of Sidonia and Jessica Jones!  It's a bit late for a proper year in review but I'd still like to share a couple of some thoughts on 2015 and 2016 in a sort of State of the Blog address.

First, we'll start with 2015.  While it didn't feel like a particularly productive year, I did mostly accomplish several projects that I set out to do.  The first is my Farsight Tau ally army. 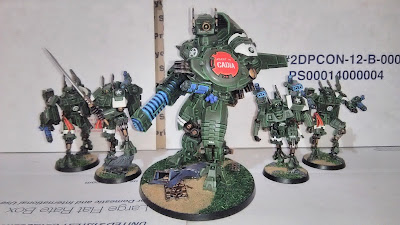 I actually completely finished this project around the summer but then ran into a bit of a snag as credible rumors started coming out about a new set of rules for the army.  When they did a few short weeks later, I realized I'd probably want to add another model to my small group to make it a functional force with the new rules.  I built, primed, and washed that final model (my Broadside conversion) but failed my will save vs Netflix and binged on some shows instead of finishing the model.  I do hope though to get it done this month though.

The next project that I worked on this year was my set of house rules for the Robotech Tactics minis game that I dubbed "Vermilion Squadron".

I got in early on the game's kickstarter in large part because of a promised set of small model count skirmish rules.  When half the rewards were finally released a year late (with the remaining half still pending and approaching three years late...grumble... grumble), the skirmish rules were unfortunately not included and got lost along the wayside.  I decided to try and make a relatively quick set of house rules to retrofit back into the game that functionality.  It wasn't as large in scope of a house rule product as my Heavy Gear houserules but I'm happy with the results.

The final main project that I worked on was two fleets for the newly released Halo Fleet Battles game.  I initially thought that I'd do only a single fleet that was easily divisible in half for demos; after finishing that first fleet, I decided to just make a proper OpFor for the game.

With a few non-modelled options like Spartans and Zealots onboard ships, I'm at around 900-1000pts for each fleet with regard to what I can carry in my foam case.  Not pictured above is the extra base of small UNSC frigates that replace the second large carrier for that faction.

Of course, not everything is rosy as I did have a pair of projects that I had planned to complete in 2015 that I didn't.  I'll be discussing them along with some initial thoughts on 2016 in the next post that I'll hopefully put out today as well.

Posted by SITZKRIEG! at 5:02 PM No comments: