Dialing in the size and resolution... Rising Son V3.0! 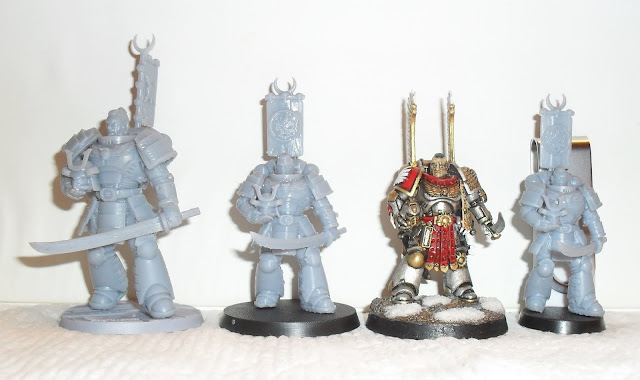 I had some time this weekend and decided to asymetrically resize the same pose and support structure and reprint the model at 50 microns.  I fully admit that this was the easy way out but I figured I'd give it a shot to check out the proportions as well as the more typical 50 micron layer height that I normally print at.  At about 6 1/2 hours print time, I'd personally say that the detail and the proportions compared with the official primaris marine are both pretty good though there is a softness on certain parts of the face and aquilla on the more recent print compared with the previous one.  We still didn't have any real direct sunshine to speak of with another pair of rainy days so the resin remains a bit rubbery (and wet from the water rinse in the case of the newest print as I took the pics right after!) so it's still a bit hard to make out the details in the pics.  After some post curing, it'll be off to painting for the smaller RPG scale and correct scale marine but I think I'll leave the primarch scale print as is.  Now I just need to find out what paint scheme I intend to use.  I'll definitely do a base of gloss black but I'm not sure of what color highlights and details that I'll end up using. 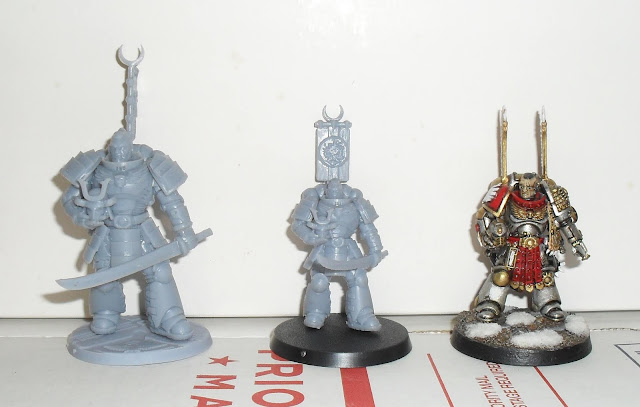 I finally got around to printing the one piece assembled Rising Son marine and the results are definitely interesting.  I resized the model from the previously printed one to 85% but it looks visually like it's closer to 66%!

There are a couple of reasons that could contribute to that seeming discrepancy in size.  The first is that previously I printed the parts separately so the little gaps with glue could increase the size of the final model whereas I definitely overlapped them when combined it all digitally.  Second, resin does shrink both with printing and temperature and the ambient temperature was 10-15 degrees below my previous print that was done during a relative winter heat wave in my area.  It's supposed to only be a 1-2% but maybe it's more.  Additionally, this was done with a slightly different resin (same manufacturer but now with an "ABS-like" moniker added to it) so maybe that contributed.  I virtually measured the model to the top of the hair and the final result is only about 1mm below what I expected; it was supposed to match the Amulius in height but the picture isn't an exact comparison as Amulius is sculpted onto a small 2mm high rubble platform on top of the 40mm base.  The final and biggest difference is likely the various proportions in that the official primaris model while better proportioned than normal marines is still far enough from human shaped to make a difference.  With my previous 3d printed models, I noticed that I definitely needed to "thicken" models 10-20% to get them to look good on the tabletop versus good on the screen.  When I arrange the next marine pose, I'll probably increase the height by 5% and the width/depth by 10% to give them bulk more consistent with the official models.

The good news is that at least at first glance I don't see any obvious miscasts.  The sword edge is a bit chipped and I had to level out the butt plate as it was edge was a bit curved so I sanded it down.  The parts that I was worried about ahead of time like the helmet and chest horns and banner actually came out IMO pretty good.  I still have to cure the model (which will probably take a few days given the lack of daytime direct sunlight forecast locally) as well as trim a few more nubs but I did what I could with the rubbery flexible resin without damaging it.

I don't want to sound like I'm unhappy with the results as I'm not but just wanted to hit the potential issues first in the post.  Regardless of the above, I'm actually happy with the size of this first 1pc model even if I plan to change further prints.  This particular model actually fits quite well on a 25mm base and makes for a good RPG model as it's more in scale with other figs compared with official primaris. 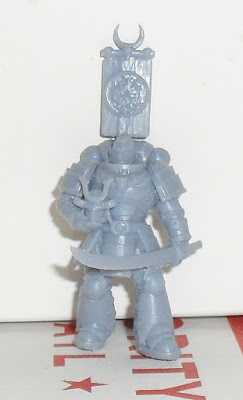 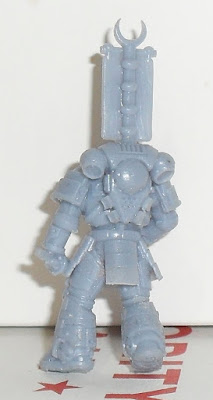 Posted by SITZKRIEG! at 5:49 PM No comments: 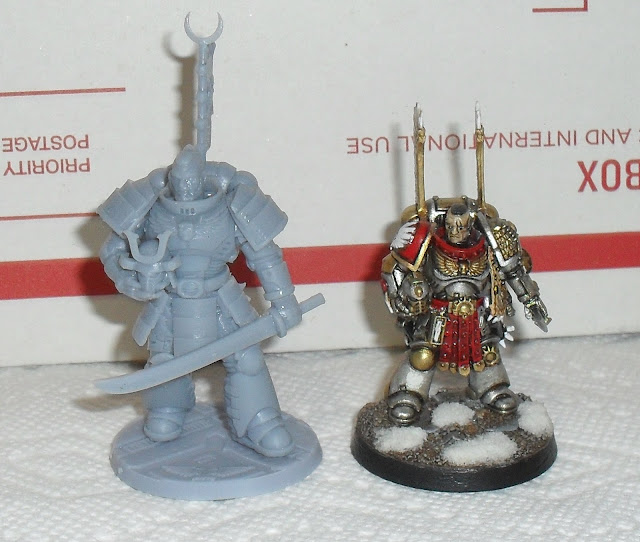 Well, it took a few days of printing due to misprints as well as another couple of days in order to have enough sunshine to post cure the model parts but I finally printed and assembled my first Rising Sons primaris marine.  I printed him out bigger (closer to primarch size than primaris) in order to see how the details resolved and overall I'm happy with the results.

I printed him out in pieces and assembled him as you would a normal marine but I think the next rescaled version I'll attempt to print at the "correct" size.  I do see some things that I want to change though to make sure the model will be durable enough to see play on the tabletop potentially.  You may notice that he isn't using a chainsword katana as I had many problems trying to get that to print correctly with the teeth on both sides of the sword so I switched it to a power katana instead.  I suppose that will necessitate a promotion to Lieutenant as well.  :)  Additionally I turned the sword inward for stability reasons as the separately printed parts left a rather fragile wrist; that shouldn't be an issue with the one piece model though but I would like to hear whether the sword position is better like this. 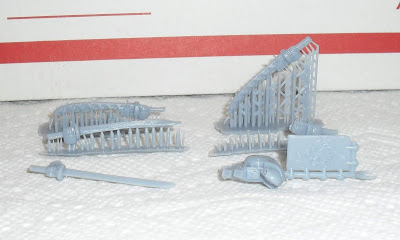 I also had a misprint where the supports weren't solid enough on the exhausts of the backpack so I took the opportunity to redo that as well since the Cyberpunk Oni symbol was too fine to survive priming printing.  I'm still not happy with the overall dimensions of the back banner though and will likely redo it again with the rescale.  I'm leaning towards using the sashimono style banner but redoing it as a traditional 2nd edition 40k T-shaped sergeant banner.  I'll have to thicken up the parts significantly as even at primarch scale (52mm to the top of the head) they're quite fragile.  I'm not sure what icon I'll use (aquilla?  raptor?  oni head?) as well and wouldn't mind some feedback on all of the above.  Here are the other pics from different angles. 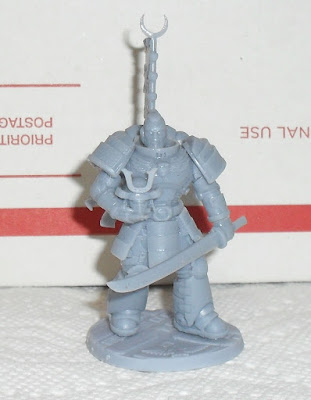 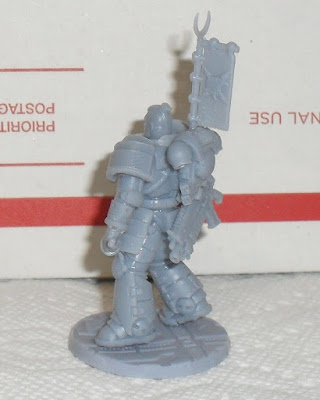 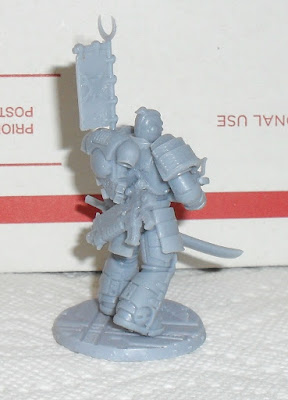 My previous attempt at a historical conversion of Primaris marines into Polish Winged Hussars went well enough (link here) so I figured I'd give another famous warrior group a shot.  In the months since, I got my first 3d printer (a resin SLA Elegoo Mars) and have been experimenting mainly with figs for an RPG campaign I'm in.  A whole bunch of high quality primaris style 3D model uploads are on thingiverse so I decided I'd try my hand at a fully virtual conversion and settled on a Samurai motif.  I suspect the general familiarity with samurai armor is pretty high so I won't post pics of historical resources used for inspiration like I did with my Winged Hussar project.  The main samurai components that sparked my interest were uploaded by indignentshrew on Thingiverse (link here).  I'm still resizing the various parts for primaris and deciding on the various design flourishes I plan to add but this is the initial mock up of my first Rising Sons Intercessor Sergeant.  Please note that I can't 3D model anything more than a simple cube or sphere so am limited to the more traditional physical conversion techniques of cutting/pasting from existing sources (3d models in this case instead of from my bitz box!). 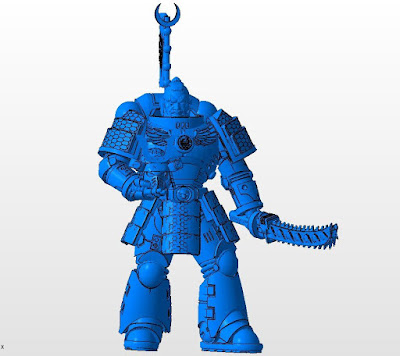 It's hard to make out but the icon on his chest aquilla and on his sashimono banner is the Cyberpunk 2077 Samurai logo.  I have serious doubts as to both (especially the chest) printing correctly so I do expect to adapt them this week.  Additionally, I'm not entirely happy with the size of the sashimono so will likely enlarge that as well as reposition the chainsword katana a bit more at an angle.  In case it wasn't obvious, my primaris inspiration for this pose was the recent event exclusive Lieutenant Amulius figure that I also used to convert my Lt. Googely Eyes Winged Hussar.  :)
Posted by SITZKRIEG! at 7:36 PM No comments: