I've decided to post a house rule change to the FASA rules that I originally came up with in my vest wearing, teen long hair early 90's wargaming days.  The FASA Star Trek Starship Combat System rules were designed in the wild west of game design 1980's and they definitely show it.  For instance, the game is based on hex grid combat so you'd expect that the firing arcs of wtrieapons as well as the defensive shield arcs to be based on that hex grid.  What you may not expect nowadays is that they were completely different in a needlessly complicated THAC0 sort of way instead of sharing the same arcs.  Shield arcs were strictly based on the grid and what shield you were actually hitting.  Weapons, however, were not.  Your forward shield arc was not the same as your forward weapons arc.  I've shown both in the picture below with the firing arcs on the left and shield diagram on the right.

On top of that, the arcs themselves were wildly out of scale with each other with the side arcs being much bigger than the front and back.  Now I can see some semblance of adherence to starship design there (the side arc isn't blocked by anything like engines unlike the other arcs) but it doesn't make for a very fair distribution.  On top of that, the rudimentary ship construction rules allowed you to assign multiple arcs to a weapon for no additional cost despite the additive effect.  A weapon that only fired in your front arc costs the same as an identical weapon that fires anywhere in your forward, port, and starboard arcs combined (so basically only excluding the straight line right behind your ships).

In one of my first house rules ever that I came up with (this was my first wargame after all!), I decided that the arcs needed to be as equal as possible and to follow the shield arcs at least partially.  I evened out each firing arc to three shield arcs each.  For instance, the forward arc would now encompass shields 1/2/3 on the diagram.  The forward/port (F/P) arc would instead be 6/1/2.  Port is made up of the full 1/6 shield arcs and the corresponding port halves of the 2/5 arcs.  They pretty much all equal out to 180 degrees roughly now and mostly correspond to three shield arcs.  The only outlier in this system is the rare ship that uses F/P/S which only excludes one straight line on the entire hex grid; those ships would instead have their WDF increased by a flat 10% overall to account for the almost full 360 degree firing arcs.   Thanks to Christian Wimmer for making the original version of this images up for me in order to help explain the new arcs! 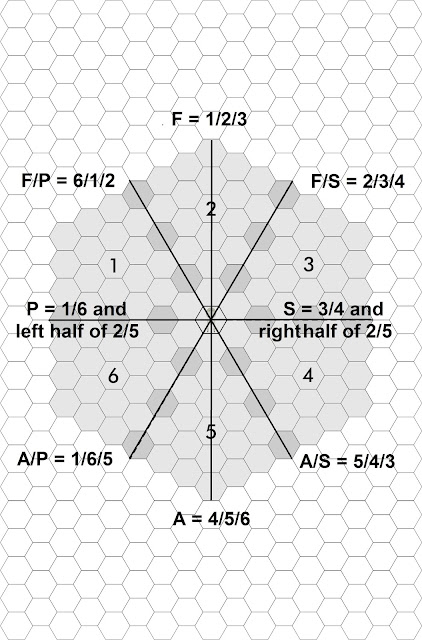 As always, thanks for reading and questions/comments/criticisms are welcome on the above optional house rule changes.  With the game pretty much dead for almost 25 years, the house rules above are obviously not endorsed in any way by anyone other than myself and are completely unofficial.  :)
Posted by SITZKRIEG! at 6:00 PM No comments:

Another of Bill Krause's physical models ported over to the old FASA game system!  Bill did not actually design this vessel originally but rather adapted it from the original Hornet Class fighter carrier designed by Lawrence Miller years earlier.

Since I'm using Bill's tweaked design (and art with his permission) instead of the original Hornet version, I've decided to name it the Wasp Class after his own physical ship model. 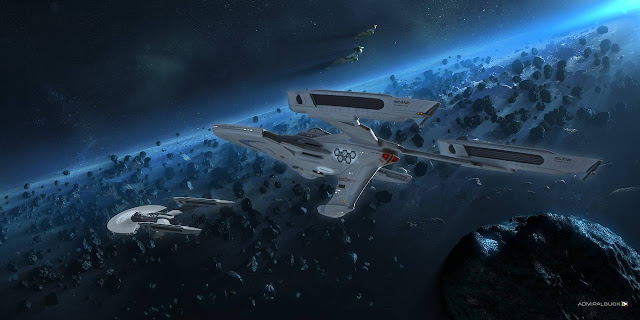 Originally, the Hornet class was an approximately 147,000 ton (Class X in FASA game terms) carrier with externally attached fighters.  Unfortunately, carriers and fighters don't really exist in the old FASA starship combat rules and I've been trying to stay true to the core rules and design mechanics whenever possible.  Additionally, as a Class X vessel, it felt too similar in feel to either the Class IX Sentinel if conservatively statted out or especially the Class XI Shangri-la if aggressively statted out.  Instead, I've decided to make it a much lighter destroyer class instead for my FASA houserule stats while still paying homage to its original "carrier" role in the stats and especially the backstory.  So, without further blathering on, here is my take on the Wasp Class VIII Destroyer.  To get the full sized picture suitable for printing, right click and open the image in a new window. 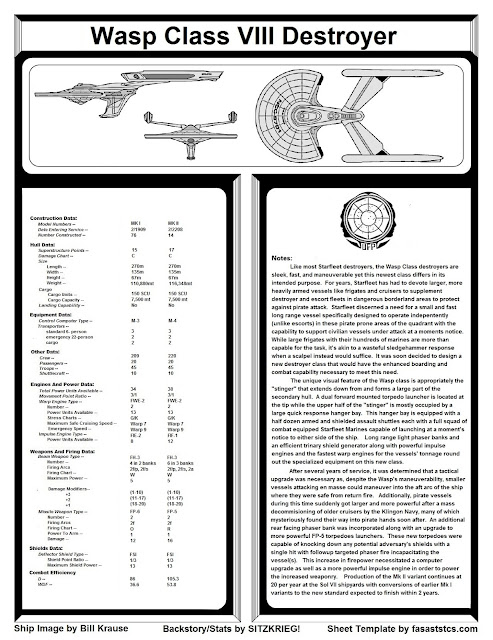 In making this destroyer, I was trying carefully not to supercede the next size/power class up, namely the light cruiser.  The most modern official FASA light cruiser, the Andor class, is still markedly more powerful than the Mk I version of this destroyer which was its contemporary but on par with the upgraded Mk II of several years later.  Initially that bothered me but then I took a closer look at the Andor class itself and saw that it only ever had a single variant.  It was certainly in need of an upgrade after 5+ years of service and I came up with my own stats for a Mk II modernized Class IX Andor that is still noticeably less powerful than the heavier Enterprise Class XI cruisers and Chandley/Northhampton Class X-XI frigates but also noticeably more powerful than this smaller Class VIII destroyer.  Once I'm done with new ships, I may post my upgraded Andor Class light cruiser as well.

Posted by SITZKRIEG! at 7:36 PM No comments: