Yeah, I know.. the last part of the title is a stretch but I had to try!

Hey guys and gals... not too much has happened here on the blog rules front over the past couple of weeks.  After letting the combat groups 2.0 rules percolate for a while, I've decided to add them into the rules and replaced the combat groups section under of the table of contents with the newer simpler rules.

For those who don't follow the DP9 website and forums, a new edition of Heavy Gear was announced a week ago.  The open playtesting will begin next month when the rules are posted but so far the only public info we have is that they're "significantly different" according to the Dave over at DP9 when asked if current books will be compatible.

On a more personal note, I've finally started assembling my NuCoal minis after I got a two more during the recent Miniature Market Black Friday sale.  I've also finally assembled (or more accurately based) my hoverbike GRELs as well.  To round out the zoom-zoom-zoom NuCoal force, I've got a GP squad of Chassuer MKIIs as well that I've had for a while still to be assembled.  That gives me about 1300-1500TV of NuCoal depending on how much I spam the upgrades (BOTB, extra sturdies, etc). 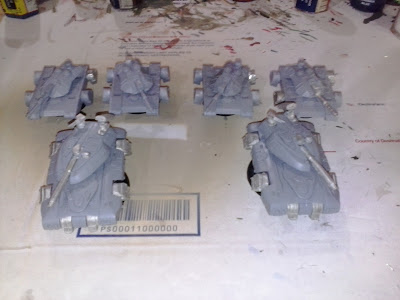 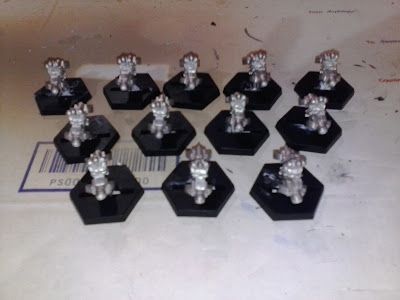 Paradoxically, the hoverbikes are bigger than I thought and the Fusiliers (for a size 10 vehicle) are smaller than I expected when put next to gears.  I have to say though that I like the sculpting on both tanks and especially the new Hetairois.  The casting was also top notch with only some tiny tiny bubbles on the tops of the Fusilier engine plates occasionally and a few other areas that were covered with other bits when assembled.  Apparently at some point they switched from all resin to resin/metal hybrids with the Fusiliers as I got one hybrid and 3 pure resin.  The Heterois though are a newer kit and to my knowledge have always been resin/metal hybrids.

Now onto the NuSales part of the title...  Is it just me or does it seem like stores are dropping alot of HG on clearance?  Miniature Market would be a good example as they basically put all their HG stuff on clearance and haven't restocked the stuff that sold out during the Black Friday sale.  HG bags at Battlefoam were 50% off as well.  Finally, a friend also mentioned that another online store (have to confirm with him which one before adding it to this post) was doing the same.  While the huge sales are great for fans in the short term, I have to wonder if they'll be bad in the long term if the stores are just divesting themselves of their HG stock.  If you know of any other stores that are doing the same or other big name online retailers that are instead adding HG to their lineup, feel free to let me know in the comments.