My initial 2018 review of Shapeways printing for wargaming (link here) ended up with some nice figs for me although there was a misprint on the weapon of the most prominent figure.  I contacted Shapeways over the holidays about a reprint for just that miscast figure and they got back to me fairly quickly.  It turns out that the wall of the fins on the weapon were too thin and this wasn't caught by either their automated systems, the pre-production manual check, or the post printing Q&A.  Their support staff was quite helpful and even sent this picture to show the exact areas that were too thin. 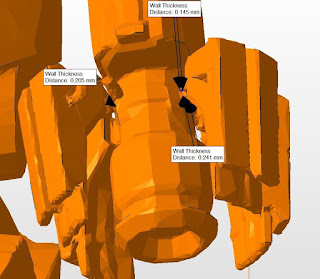 I only hoped for a reprint of the initial figure but apparently, since the error wasn't caught at any of the steps, they instead gave me a full refund as store credit.  They offered to change it to a refund via my credit card but I figured I'd partly redo the figs and reorder them instead so kept the store credit.  I opted this time to "extrude" the models to avoid any potential issues like the one above as well as to give the figures a bit more bulk.  For example, my sniper rifle alien had three very fine head protrusions of equal length but with just normal (and careful!) handling I've already broken off the tips of two of them.  Here is an example of what I mean by "extrusion" with the original model and three additional successive levels.

I incorrectly stated that the process would make the facial details more prominent in my last review based on my memories of ordering back in 2012.  My 2012 model had even more bulk added than the most extreme shown here; this time, I decided to just use the first level as it was enough to thicken fragile areas on both figures and to avoid any automatic "patches" added by Shapeways like with the glob on my miscast model's hammer.

I didn't opt for expedited shipping and it took about a month to get it this time as well so the Christmas rush wasn't responsible for the extended delivery time.   While I didn't get extra detail from the extrusion, I'm definitely happier with the increased overall bulk compared with the previous proportions.  Previously dangerously thin sections are noticeably thicker like the sniper barrel find and there are no misprint errors this time.  I made sure to resize the two new models (in their hard to see clear form below( to the same height scale as the previous prints  despite the variant poses.

I did a quick primer coat (this time in their intended individual base colors) and took a scale pic with some other figs (40k primaris and Star Wars prepaints human).    I hope to finish these two latest figs this upcoming week and will post a quick update when I do.  Just like these models have their individual facets hidden by textures, I hope that the polygons won't be visible once painted as I don't see them on my initial 2012 3d printed model.

Posted by SITZKRIEG! at 5:41 PM No comments:

Well, another year has gone by and so it's time for another year in review post.  I'll start with what amounted to the majority of progress on my blog... digital hobby publishing.  Starting with Star Trek tabletop gaming, I worked on over a dozen sheets under my SHIELDS UP! house rules (link here) divided up between the current Star Trek Adventures RPG by Modiphius and the classic FASA Starship Combat games.  This is where the bulk of my updates are for 2018 and, while I myself haven't tried any of them out in actual games, some other players have reported using my fan ship designs in their own campaigns.

Additionally, I tried my hand at some very basic programming and developed some custom ships (link here) for the fan made computer game version of the classic FASA game along with a tutorial for getting it all working (link here).  All in all, I'd say that I was significantly more productive in that virtual realm compared with typical tabletop hobby work albeit with almost no difference in the "games played" metric described above (excluding single player missions). 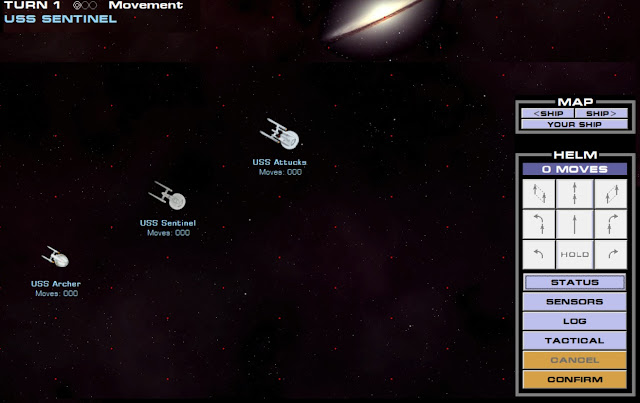 When it comes to actual hands on traditional hobby work, I frankly didn't accomplish much.  In 2018, the only miniatures that I worked on were the painted Winged Hussar pictured in the center below and another converted/built yet to be painted.  I had hoped to finish off a half painted Tau broadside suit conversion I worked on a few years ago but never got around to it.

I hope to do better next year but realistically I said the same thing last year in my previous review so I won't hold my breath.  While I did visit the local games store a bit more in 2018 for RPG reasons, I only ended up playing a single miniatures game after an RPG session.  That definitely puts a damper on any larger hobby plans leaving me with the occasional conversion project (like my RAFM minis or Winged Hussars).  In the next month, I do plan on painting some of my 3D printed figures as part of the last phase of my review of them.

Next we have a mix of the two categories above in my Shapeways miniatures printing.  I relearned by brute force trial and error how to pose and modify existing models (although actual modelling is still far beyond my grasp) and mostly successfully printed out physical miniatures.  I did hear back from Shapeways about the misprint in my order and am awaiting my reorder of tweaked figures.  I do plan on covering the reprints as well as painting up several of the figures for use as well.  If time and budget allows, I also hope to place another later on in the year for my first ever custom starship miniatures including hopefully a ship or two featured in my SHIELDS UP! house rules. 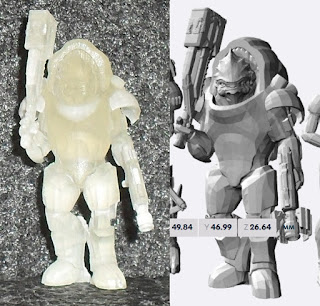 Finally we have the miscellaneous updates.  In between the above, I've recounted my truthful experience in backing the failed Robotech Tactics miniatures kickstarter (link here), reviewed Artel W's series of boutique 40k themed miniatures (link here) as well as the Star Trek Discovery Season 1 (link here), reviewed the Starfinder RPG and my unsuccessful attempt at starting a local group (link here), and even covered the history of my blog's title (link here).

All in all that makes 26 updates for 2018 or roughly one every two weeks or so on average.  In reality, they came more in fits and spurts with May being a month without any update.  In addition to hopefully doing a bit more hands on painting in 2019, I do also hope to post a bit more regularly or, at a minimum, not completely miss any months on the blog.  As stated above, I do hope to finish off some existing miniatures on my painting table (like my 40k Tau broadside linked here as well as my recent 3D printed figs).  On the digital front, I don't see myself coming out with too many ships but I am considering publishing an updated 2019 edition of my TOS Recognition Manual (link here) if I can come up with a suitable Romulan ship to add to the roster.

I don't know if this type of review is informative to any potential readers but I do feel that it (at least temporarily) helps to focus my efforts for the upcoming months.  Regardless, see you all in a few weeks with my next 3D printing update and thanks again for reading!
Posted by SITZKRIEG! at 7:00 PM No comments: