I worked on the second half of the heroclix figure that I used for my Troll character figure.  She started as a Red She-Hulk figure (hence the skin color) that I repainted and added magic effects via 3d printing in clear resin.  Yes, I've accomplished what cheap prepainted miniatures did in 2006!  Hey, it's still a first for me. 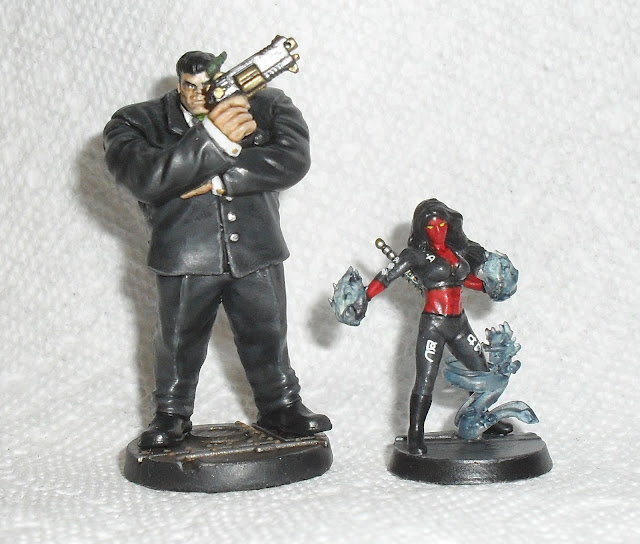 I'm happy with the detail and color of the clear resin (that I colored bluish via a wash to less than stellar results).  Somehow the figure didn't seem too dark in tone despite having jet black hair and clothing but now seems like it after I repainted her in dark grey clothes.  I keep debating whether I should strip the paint off completely as it shouldn't damage the resin itself as people have been using acetone to clean resin post printing in the post-Covid rubbing alcohol shortage.  For now, I'll leave her alone but I may revisit this figure at a later date.
Posted by SITZKRIEG! at 5:00 PM 2 comments:

It's been a few weeks of silence so I figured it was about time to show signs of (hobby) life here on the blog for the world to see!  While I haven't been a busy bee like Ashley over at the Paint it Pink blog (link), I've done a small bit during the past month. 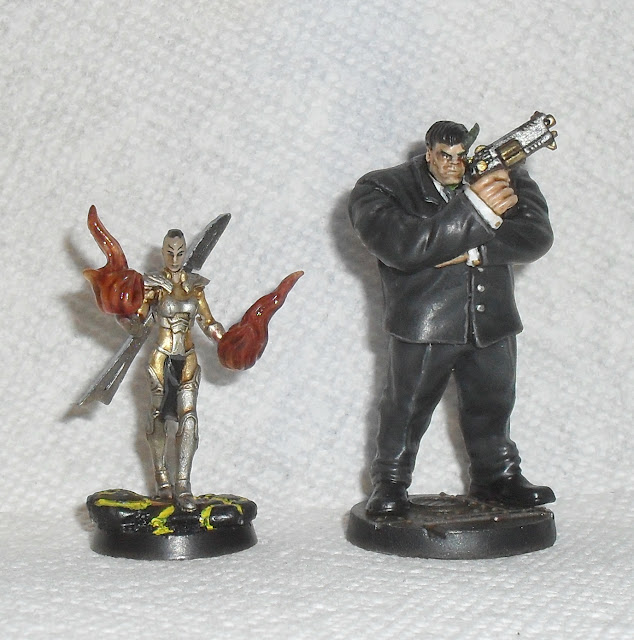 I finally got around to some easy painting with a redo of some heroclix figs I picked up a while back for RPG characters.  One was initially for the Starfinder campaign that I'm in but I decided to go with my Krogan character instead of this Suli-jann Solarian.  The original fig is the Caiera clix model from the Planet Hulk series that I rebased and repainted relatively quickly.  I'm not entirely happy with the results though (too much wash in the armpit for example) but I've already overcoated the models and don't want to strip them completely to redo it.  The second one was a troll personal assistant character (think half bodyguard/half butler!) for use in Shadowrun.  That one came from a Hulk clix double model that I converted with a troll-like horn and a more appropriately sized 3d printed pistol.  He actually came based alongside a Red She-Hulk model that I can also convert into a Shadowrun character model as well so you may see that sometime on the blog as well.  Hopefully I've improved my eye technique since my Lt. Googely Eyes Hussar model; I really did have to make the eyes tiny in ever shrinking steps despite my gut instinct to get the result above instead of what happened before.  This is just average work and not even my best by far but it's basically a single weekend's worth of effort from start to finish (including drying time!) and more importantly completed work unlike my ever growing 3d printed pile of unpainted shame.  :)

Additionally, I printed out both of the 40k Lieutenants previewed in my last post but the Space Wolf was marred by multiple misprints.  I was testing out a new slicing program that apparently requires more manual supporting of models than I initially expected based on youtube reviews.  The Blood Angel did turn out well but I plan on redoing his loincloth icon as it wasn't extruded enough in the print unfortunately to be much of a visible detail after priming/painting.  I printed him out at a smaller traditional marine scale (32mm) so I may still assemble him and leave the revised version for a possible later full scale 40mm primaris fig.