Instead of a new ship this week, I've decided instead to publish an unofficial game aid that my fan ships have been lacking for some time.  In order to use official ships in the game, you were supplied with punch out cardboard hex tokens for your ship in the base game and on a special page to copy and print in each of the Ship Recognition Manuals (in addition to the optional miniatures!).  I've decided to take some of my recent TOS themed ship sheets and make printable tokens for them as well.

Initially, I made them 1" hex counters but then I saw they were actually smaller than the official ones by 1/8th of an inch so resized them.  In order to print the images below to scale, just expand the image horizontally to the full size of the page in portrait mode.  For the pdf version linked below, simply printing it out normally should do the trick.  To save folks printer ink, I decided also to do a version of the counters with a white background as well.  Enjoy! 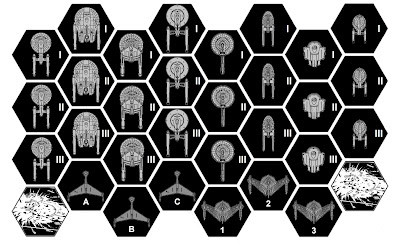 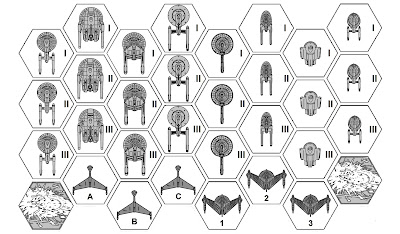 
P.S.  For particularly observant readers, you'll see an (as of the time of writing) unknown ship in the sheet in addition to the two destroyed ship markers I included.  Just consider it a sneak preview of the next ship in my TOS series.  :)
Posted by SITZKRIEG! at 8:00 AM No comments:

She might be small but she packs a heck of a punch...  The Minuteman escort is a revision of one of my earlier published classes called the St. Petersburg.  In that sheet, I used a vessel from the Starfleet Museum site and converted the ship to look more like the Defiant from DS9.  Recently, I came across Peter's work on trekbbs and he actually had a TOS era Defiant design already done! 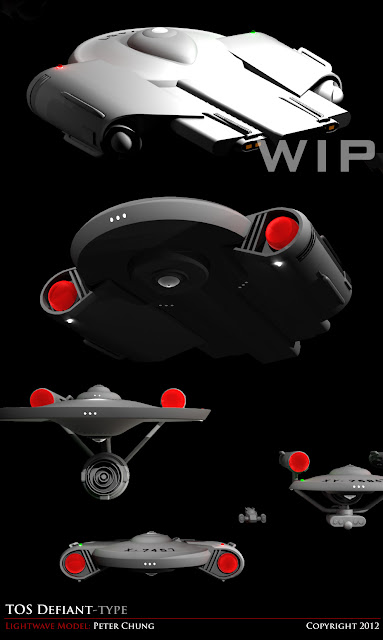 He's allowed me to use his design and even provided me with a full custom ortho graphic to convert for use on the sheet!  I took the opportunity to update both the overall look of the sheet to be more visually consistent with later efforts as well as tweak the stats to better fit in with the continuum of ships I've put out since.  This version still packs a heck of alot of firepower and is quite maneuverable but isn't as advanced or defensible as my earlier version. 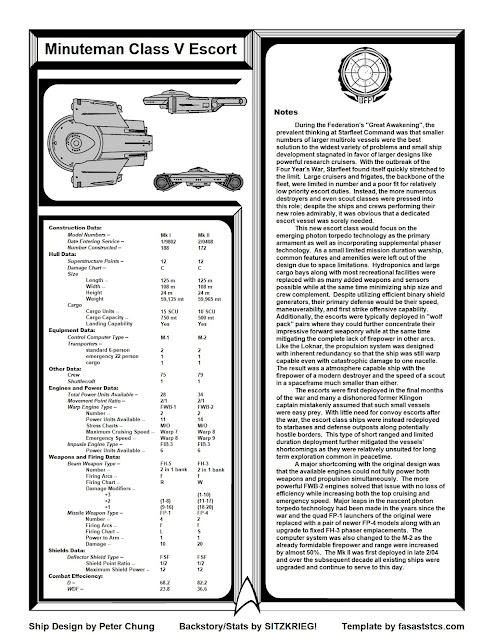 As always, feel free to comment and I'd love to hear any thoughts from folks who have used any of my ships in games.
Posted by SITZKRIEG! at 10:31 AM 6 comments:

Shield of the Federation... The mighty Repulse Class Destroyer!

Just on the heels of producing the finished U.S.S. Hood, Tycho Shipyards (a.k.a. modelmaker Bill Krause) pulled triple shifts in order to also complete yet another ship, the Repulse heavy destroyer, in record time.  Bill went from a basic frame to finished model in just over two weeks in order to be able to display the model at the Wonderfest 2017 convention in early June.  You can follow his remarkable progress at the modelling thread linked further below.  Obviously, this puts my own pace at finishing my single Tau broadside and dozen or so Rafm gears to shame.  Here is a pic of the finished product that frankly I suspect many people will think is a CGI 3D model screen cap instead of an LED lit physical one. 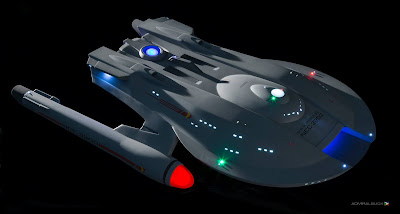 This is the first of Bill's models that I've followed since the planning stages and it was nice to see it coming together and the changes made in relative real time with his posts.  He graciously allowed me to use the images for my sheets as with previous models and even gave me some insider info on the dimensions and official stats of the class.  I've tried to follow them as much as I could within the bounds of the FASA rules while still keeping the class distinct from other ships (including another destroyer that I have planned).  Whereas Bill's Sentinel light cruiser is a graceful and advanced rapier, I made the Repulse a dependable and durable heavy destroyer in the stats.  I hope you guys and gals enjoy and as always let me know if you find any mistakes or have any questions/comments/criticisms. 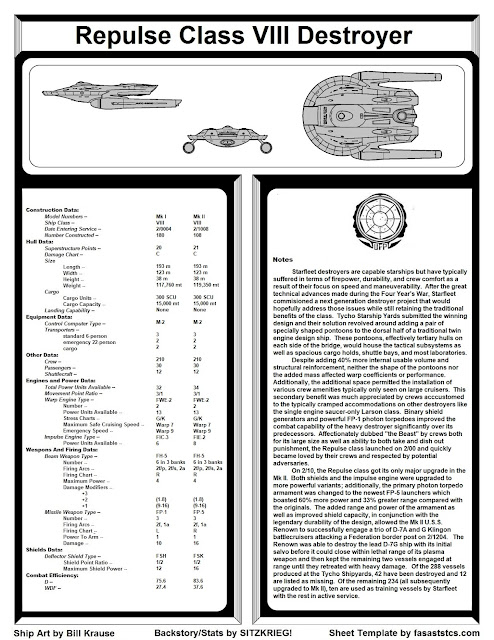 Pride of the Star Navy... the Romulan V-10 Nighthawk for FASA!

A while back I came across the many designs of Atolm over on trekbbs but one of his earlier designs for a Romulan warbird I found elsewhere really caught my eye.

I really like that this was a hybrid style design incorporating the traditional TOS warbird shape but adding the later, more detailed features like decorative hull plating instead of a bird decal.  In the FASA body of work, the Romulans relatively quickly go from light cruisers and scouts of class of class V-VII to heavy cruisers topping the scales at class X-XII with not much inbetween when the actual transition is made.  I decided to make the V-10 Nighthawk the "missing link" in the Romulan Star Navy's arsenal.  This was also my first attempt at STSTCS.com style digital "tracing" of traditional artwork to make it look more like the FASA style used on my previous sheets.  My efforts in MSPaint are crude compared with Bryan's but hopefully they still work well enough.  :)  As always, I wouldn't have anything to post without the art that I'm graciously allowed to use so special thanks to Atolm for letting me use his designs! 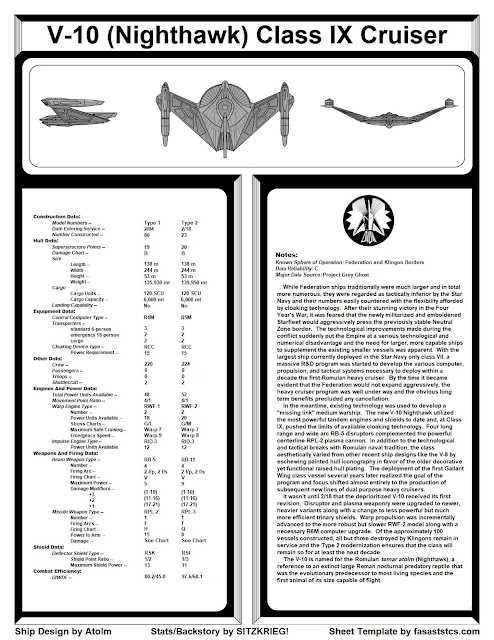 Aridas' 50th Anniversary Star Trek thread received yet another update with a slew of cool ships.  The one that stood out most for me was the Class I Corvette (the U.S.S. Juliet) and I felt that I had to make a FASA sheet for it right away! 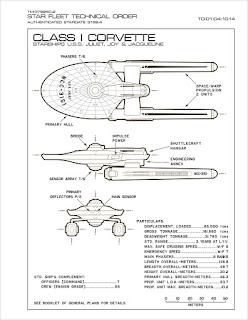 I tweaked it visually a little bit  to better mesh with my other ships and statted it out to resemble a TOS FASA Voyager style ship.  It's a bit more well rounded than my previous small to mid sized ship which was meant to be a U.S.S. Defiant style tactical powerhouse at the expense of everything else.  As always, the pdf version link is below the image and I welcome questions or comments about the sheet.  Thanks again to the talented Aridas for yet another cool design and I can't wait to see what see what comes next! 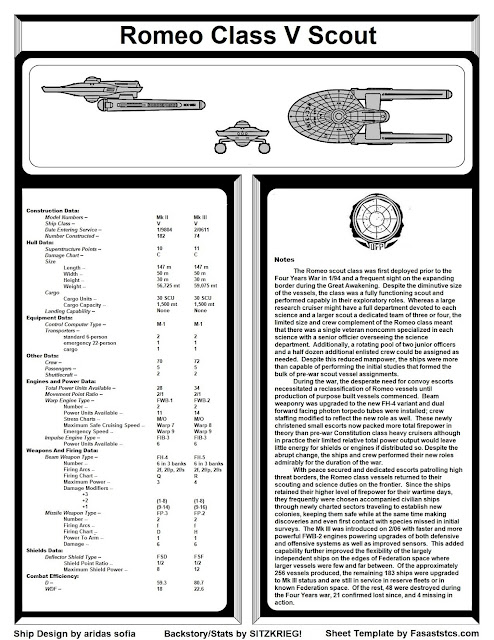 
Blogger's Note:  The first version of the Romeo Class kept the ad-hoc escort designation.  Upon further consideration, I decided to change it back to the original scout class.
Posted by SITZKRIEG! at 11:35 AM No comments:

Just a quick update.  About a week or so ago, Games Workshop came out with a custom heraldry guide pdf for their new line of Primaris Space Marines for the upcoming 8th edition of Warhammer 40,000.  To make it a bit easier to use for lazy folks like myself, I cleaned it up by making it "watertight" instead of gothic motheaten so that you can just one click fill paint a part in free programs like the Paint app/MSPaint program that comes with windows and not have it bleed through to another.  Enjoy and thanks to GW for coming out with the guide in the first place and BOLS for converting it to the image that I subsequently cleaned up! 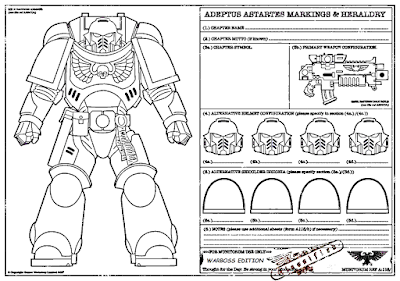