What if you took a grand heavy cruiser designed as the preeminent multirole exploration vessel and kitted it out instead for combat?  That's what Bill Krause did with his Hood Class Battlecruiser 1/350 scale model shown below and I'm happy that he allowed me to adapt his ships yet again for my sheets.

Obviously his physical model is photoshopped into a digital scene but the original scale model is quite impressive as shown in the link above to his WIP thread.  Also, Scott Bell-Fleitas was kind enough again to allow me to use his art from his deckplans (which I highly recommend as an RPG aid as an owner of two sets).  This ship, while still capable as an exploratory vessel, is statted out as a refitted combat bruiser.  While I suppose simply applying the "refit" rules for a few decades could also have depicted the Hood Class, I thought that the changes were significant enough (both in role and superstructure) to be its own class.  Additionally, the "refits" of the Connie are obviously the TMP era Enterprise and subsequent 1701A so I thought it best to further differentiate it from them.

As always, I appreciate feedback on the sheets as the format is still somewhat evolving.  Finally, thanks to Modiphius for allowing me to adapt their TOS era sheet for my favorite fan ships. 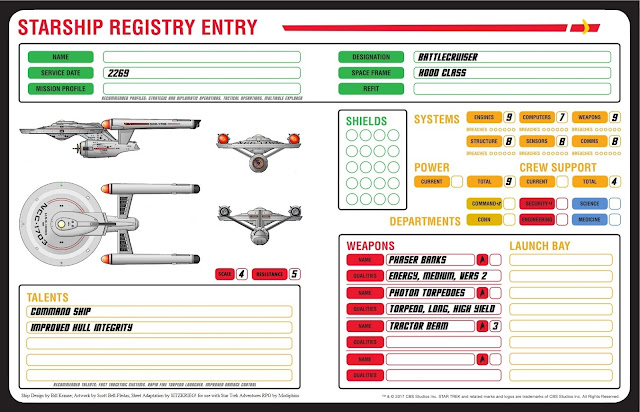