For almost a year after seeing some excellent 1/1000 scale model conversions of the TNG Akira to both TMP and TOS versions, I attempted various methods of making a TOS era Akira ship equivalent to no avail.  I tried Neale Davidson's ship toolkits and came up with this: 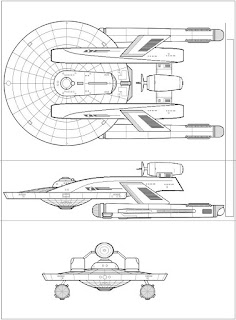 I also tried converting the Sins of a Solar Empire Trek mod's 3d model of a similar ship into something more FASA like in appearance coming up with this: 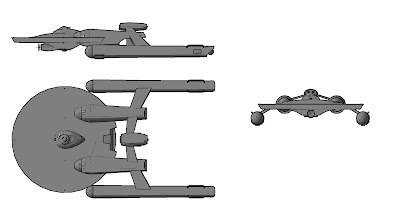 Both are excellent resources but I was never really confident in the my efforts on the final FASA style appearance to put it into a sheet.  Luckily for me, I stumbled onto another Trek ship site and found Chris Freeman's much, much better take on the same subject.

Obviously there is a wide gulf in the difference in quality between my own efforts and his so I asked if I could use his decision for both FASA and Star Trek Adventures sheets and he kindly allowed me to.  It turns out that these sheets are a bit quicker to do for STA than the old FASA ones since they don't involve (relatively) labor intensive calculations and fitting them into decades old discontinued fluff so I worked on the STA version first over the weekend. 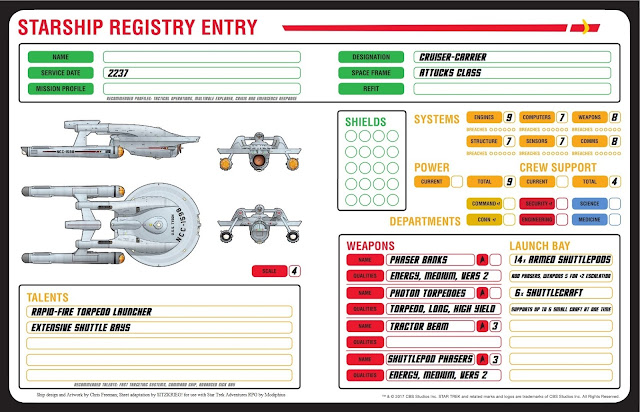 I kept the ship true to Chris' own ideas on the class as much as possible (moreso than I'd have been able to with the FASA rules!) keeping the dates and the theme of it being a Trek carrier style ship intact.  Also, I made a few minor tweaks in the appearance and layout as well as added some explanatory text compared with my initial Sentinel prototype version (which I've also updated since) in response to some feedback.  I'm debating whether I should add in more explanatory text as well such as what the talents actually do so feedback would be appreciated.

Update: I've finally come up with a version of the Attucks class for the FASA game as well that you can find at the link here.