Heavy Gear is a game that I've been interested in since it's original release back in the mid-90's due to the art style, gears, and basic Silhouette rules system.  The current Blitz! variation of the rules (as presented in the Field Manual) is a refinement of the original RPG rules and is made specifically for the minis game as opposed to the earlier Tactical versions that were offshoots of the RPG rules.  When trying to get others interested in the game last year, I noticed that the game didn't play as smoothly or as quickly with new players as I thought it would despite the refinements and that many of them were intimidated by the rules as well as the datacards for the units.  My goal with this blog is to come up with a simplified version of the current Heavy Gear Blitz! rules for use with new players in demos or even experienced players looking for a quicker and smaller game that still has the feel of the larger HG Blitz.

I hope to accomplish this with a two pronged approach.  The first is to simplify the visual first impression of the game via the datacards as well as the rules new players are presented.  While the current style of datacards doesn't waste any space and the info presented is valuable to experienced players, I plan to combine the various statistics to make for a cleaner and leaner datacard that is less intimidating to new players.  Certain rules in Blitz still carry (in my opinion) too much of the complexity of the RPG into the larger format minis game with little benefit and could use some simplification as well.  The second method I plan to use is to make the figure count used smaller than the current blitz level forces without hopefully losing too much of the playstyle the larger armies allow compared to the older tactical system and RPG systems.

This blog is an ongoing project so feel free to contact me on the DP9 forums under the username CrouchingGrizzly HiddenCheetah (or CGHC for short) with any question, comments, or suggestions.  In general, I'm working my way through the Field Manual section by section considering what I believe should be changed to make a simpler and faster variant of the game.  Sometimes an idea that I've been working on (like the Electronics stat in the first datacard post) will creep unavoidably early before it can be fully explained so I hope you all will bear with me.   On some of the longer posts that change alot, I try to explain other possible variants that I've considered as well as the reasoning behind my adopting or discarding certain changes.  For the TL:DR stuff on those posts, feel free to zoom down to the italicized paragraphs for the actual rules on the individual pages and feel free to use the attached "cheat sheet" that details some of the changes in a hopefully easy way. 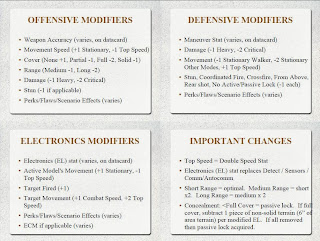