TNG Time... The Emissary and Patriot classes for STA

As mentioned before, I've mainly focused on TMP and especially TOS era can ships for Star Trek Adventures due to the lack of care variety both in the game rules and the source material.  I decided recently though to take my first dip in the TNG pool with my take on the Emissary and Patriot classes below. 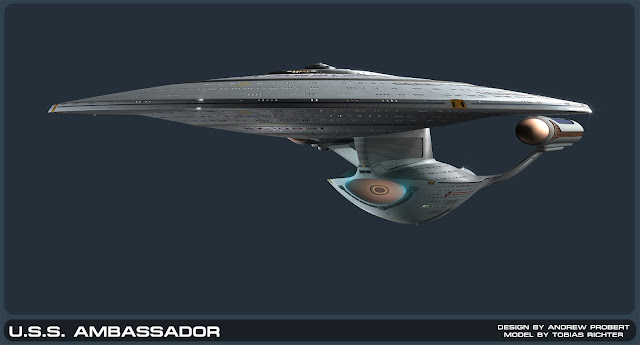 Die-hard trekkies might recognize the image above as the original concept version of the Enterprise C Ambassador Class by veteran trek artist and designer Andrew Probert.  While I'm a fan of the version that made it to the screen in the Yesterday's Enterprise episode, the original is hands down IMO an amazing design that much better segways between the Excelsior and Galaxy classes. Years after the end of the show, this original version of the ship was fully fleshed out and updated to modern standards by the talented Tobias Richter for the Ships of the Line calendar.  Both artists were kind enough to allow me to adapt their work for my sheet and I thank them for being able to bring the ship into the game with the free fan stat sheet below.  Initially I was going to refer to it as an Ambassador refit or maybe even the Diplomat class but a synonym search for Ambassador turned up a name that I thought was more appropriate to Trek flavor for a diplomatic and exploration heavy cruiser... the Emissary Class!  I had to differentiate it from the on screen version of the Ambassador that already has official stats so I gave it advanced warp drive to showcase its streamlined look as well as improved hull integrity to put it a half step between scales 5 and 6 mechanically.  The obvious choice of the diplomatic suites talent that was not on the Ambassador class official writeup rounds out the third standard talent for the ship class. 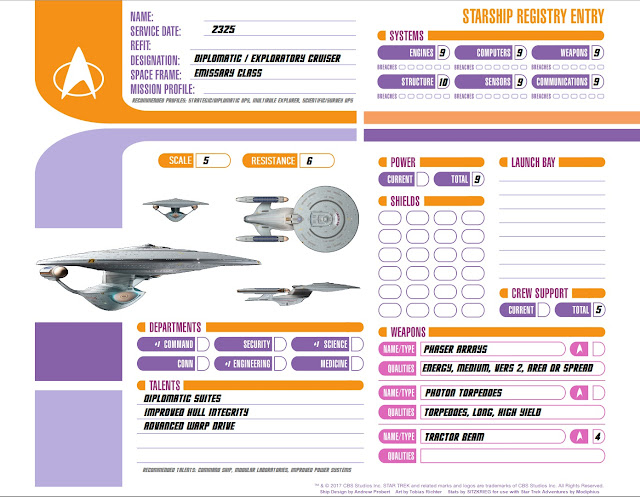 On the other end of the size spectrum is the light cruiser Patriot class shown below.  I found this awesome design by Joe McMullen by happenstance while looking for images of another ship and was instantly hooked. 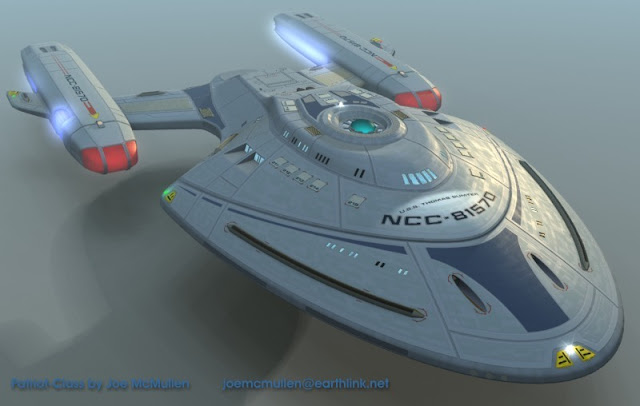 While I don't have exact dimensions, some of the images Joe made have a scale human figure in them showing the ship to be midway between the Nova and Intrepid classes in size.  When I matched the size of the bridge dome and the escape pods of the Nova class to these, the Patriot turned out to be about 10% longer and has a beefier saucer and secondary hull.  I decided to keep it as a scale 3 ship similar to the Nova but to specialize it for reconnaissance and electronic warfare instead.  In 20th century aviation terms, it's a mix between a SR-71 Blackbird and a wild weasel aircraft.  Equipped with sensitive electronics capable of both spying on and jaming the communications of adversaries, this small ship relies on its extreme speed (Warp 9.985 for up to 6 hours) and electronic capabilities as its primary defense. 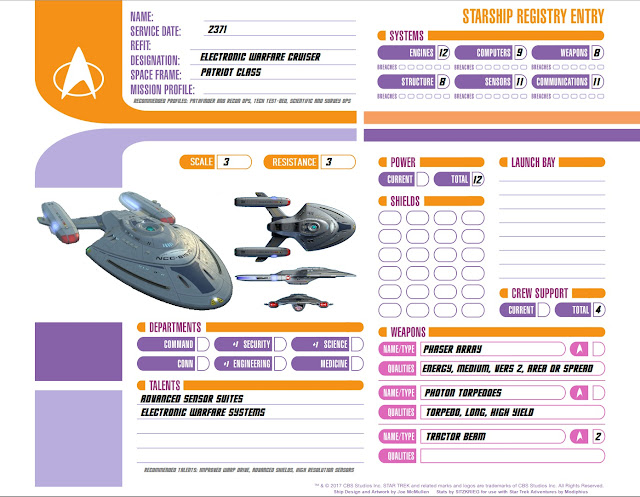 
As always, right click on the image to open it up full size in a new window or just click the pdf link for that format.  I'd appreciate any feedback folks might have and please  let me know if you find any errors.