I initially focused on custom hero/player ships for the Star Trek Adventures game as obviously they'd see alot of play if used and the pickings for the TOS/TMP eras were pretty slim in the core book.   Equally slim though were the choices for adversaries in those eras and the subsequent expansions haven't really broadened the choices either outside of the TNG era.  As such, I decided to stat up two of my favorite ships from the classic FASA game for use with Star Trek Adventures.

Luckily for me, Brad Torgersen has a treasure trove of classic FASA ship images on his STSTCSOLDA website that he reworked to modern standards and graciously allowed me to use them.  Here are what I will call my dastardly duo double pack... the D-10 Command Cruiser for the Klingons and the V-7 ECM Cruiser for the Romulans. 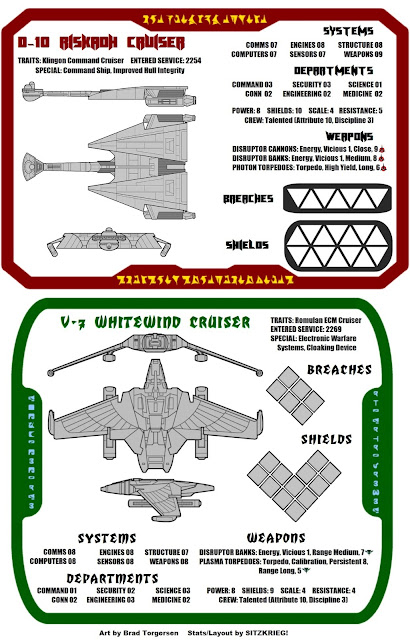 I've included a section for breaches on the sheets using the NPC quick damage rules format.  If you prefer using the full player character ship damage rules, just pencil in the first few letters of the system damaged in each box instead of filling it in.  And, just in case anyone out there is playing a "villain" campaign and would like to use either of these as their player character ship, just add 2 points each to the systems and the departments divided up however you want and then choose two additional ship talents.  Once you update those stats (and any dependent ones like shields and weapons for example), you'll have a fully capable player character ship to use for your Romulan or Klingon crews.  As always, let me know if there are any typos that I missed or mistakes in the ship construction and thanks for checking this out.
Posted by SITZKRIEG! at 11:26 AM