It's been a while since I did a full hobby update but I finally have enough to report in.  Over on the tabletop hobby side, I've got a few pots slow cooking on the stove at the moment.  The release of Kill Team for 40k got me a bit excited about the tabletop game universe again.  It's a skirmish level ruleset that you can simply plug and play your existing 40k army figures into.  I've started to parcel out a dozen or two figs from each of my main 40k armies into a separate carrying case to use with Kill Team (and also double as RPG figs as well potentially).   Additionally, I've started to collect some more bits and figures to build a few more of my Winged Hussars custom chapter.  My goal is to have a combat squad of five primaris marines for Kill Team as well as an RPG character model.  While the overall look will remain the same for the Winged Hussars, I will be testing out a few variant bits like shoulder pads and tabards to fine tune the look with the next few figs. 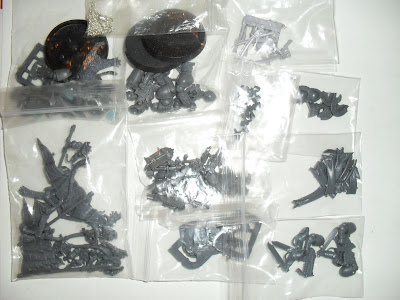 At a recent game store swap meet, I also managed to trade for a two dozen figures (mainly 40k Kill Team figs) that included a few Rafm HG minis.  The big draw for me was a broken mostly complete (no head antenna) Kodiak gear.  I still haven't painted any of my previous HG Rafm conversions from last year but I just couldn't resist getting the original version of the Kodiak to complement the Destroyer Kodiak I built last time. 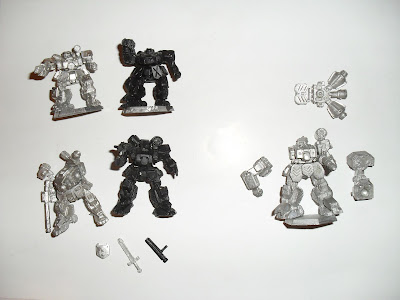 A while back, I mentioned that I was joining a Starfinder RPG campaign but that fizzled out after two games.  We didn't have a dedicated GM and no one else was interested so I volunteered on a strictly temporary basis.  Unfortunately, the "space fantasy" feel of Starfinder's setting and mechanics wasn't for me.  I wanted a full scifi rpg and it instead felt more like D&D in space.   My offer to transition the group to Star Trek Adventures were unsuccessful as the non-traditional nature of the setting (i.e. not-a-murder-hobo simulator) wasn't as popular as I'd have hoped.

The Wrath and Glory Warhammer 40,000 RPG is coming out soon and I picked up the free introductory adventure.  I'm a bit concerned about the depth of the rules/options in the core book due to the ambitious breadth they're attempting to include.  I can't help but feel the ruleset would have been better served by focusing strictly on Imperial campaigns instead of also adding in barebones chaos and xenos options but I'm leaving final judgement to after actually trying out a session as GM.