It took a while but I finally got my hands via an online trade on a Lieutenant Amulius figure to convert into a Winged Hussar.  For those following the blog, I did a digital mockup earlier this year (link here) as I couldn't wait to get the actual model.  I'm a big fan of the pose of the sculpt and the detail they put on it and I was quite excited to put my Winged Hussar spin on it.

It took some conversion efforts, regluing, and clipping after a few false starts and revisions but I'm happy with the overall look of the final model.  I had to repose and reglue the wings and backback several times both due to clumsiness on my part as well as parts simply not fitting (namely with the shoulder pads) but in the end it all works (and hopefully the excess glue isn't too visible).  I added a fur cloak to the back as I said in my digital test but it wasn't enough so I also added a fur limb strip to the front.  Afterwards, I was trying to (unsuccessfully) add the axillary shield that I've typically done but then I realized that the fur bit I used actually has a crescent shaped metal disc down near the paw which was enough for the effect IMO.

I initially planned on a custom head from Puppets War but I couldn't justify the price of an international purchase and shipping for a single tiny bit that I'd end up using as I didn't have any plans for the others.  Instead, I used an ebay coupon and opted for a slightly more feral scarred head than the standard one that comes with the model.  Afterwards I hemmed and hawed a bunch as to whether I was busying up the model too much by making him practical with a modelled scabbard for the sword and a bolter stowed somewhere.  After blue-tacking it all in place and taking a few close up pics (which revealed some mould lines and gaps that needed filling, I was glad to see that he looked both practical without reaching a cluttered state like a previous model I did (link here).   I hope to have this model painted up sometime in the next week or so. 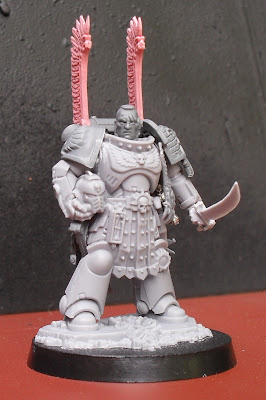 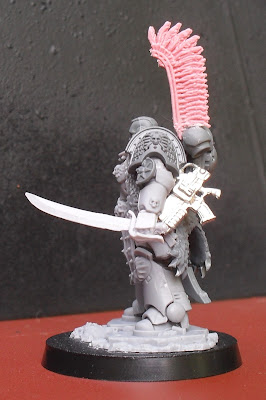 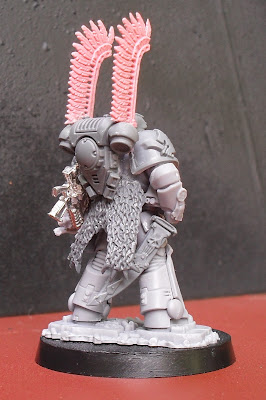