It's been a while since I made any progress on this small project for some reasons under my control while others were not.  Regardless, I decided to try and finish my second model (along with a final Tau suit) before the end of the year.  A large part of the reason is because I was lucky enough to win a contest run by a fellow 40k fan who runs the Xeno Vids youtube channel along with his brother Ian (hello!).  I subscribed to him long ago as I admired his Tau army modelling and painting skills as well as enjoyed the battle reports as well.  Getting the actual rulebook for the new edition kickstarted my interest in finishing up some more models from the new Primaris line.

I decided as mentioned above to try and lighten up the overall look of the model.  I decided to change the aquilla on the chest to white to better mesh with the wings (as well as to not overload the center torso with gold due to the gold armpit shields).  I also skipped my middle step of a darker metallic on top of the primer by just using the brighter corresponding metallic instead for both base coats and post wash highlights (so silver instead of chainmail and gold instead of brass). 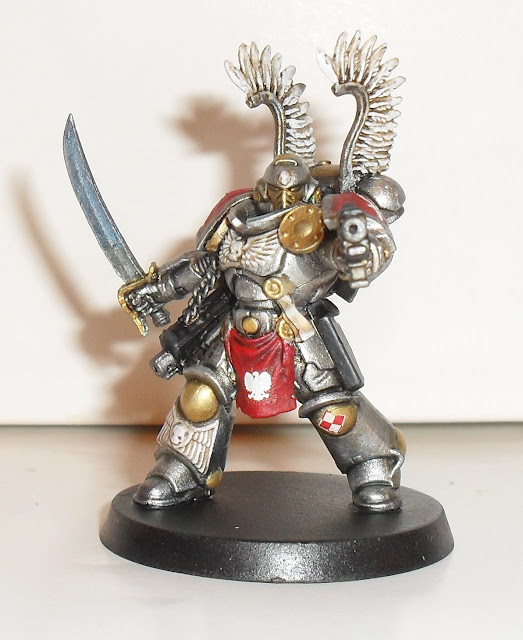 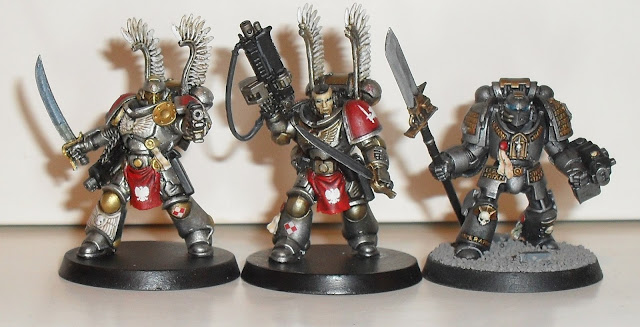 The second pic shows the differences between black primer/chainmail, black primer/chainmail base coat/silver highlights, and black primer/silver base coat and highlights (from R to L).  While I like the lighter overall tone (not exactly shown well in flash photography with my camera), I'm not sure about the change of the chest aquilla to white from brass/gold.  It does form a nice connecting line from the wings to the chest to the knee but I liked the look of the previous gold aquilla on the armor and how it related back to the sample Hussar armor I posted in the OP for this thread.  Let me know if anyone else has any preferences in that regard or other thoughts.